Complaints to the ASA on the grounds of religious offence are relatively few and far between (notwithstanding a notable pick up around Christmas). So, a recent case from Lithuania merits comment.

In fact, one of the most notable aspects of the case is its longevity.

It all began in late 2012 when a Lithuanian fashion company called Sekmadienis Ltd launched an ad campaign fronted by a bare-chested, denim-clad “Jesus” and a tattooed “Virgin Mary” with an impossible headdress. Both sported haloes and flowers, some real, some inked. The accompanying captions exclaimed “Jesus, what trousers!”, “Dear Mary, what a dress!”, and “Jesus [and] Mary, what are you wearing!”

The company has been battling the Lithuanian authorities ever since.

The ads originally fell foul of both the Lithuanian Advertising Agency, a self-regulatory body like our ASA, and the Lithuanian State Consumer Rights Protection Authority. The Lithuanian Bishops Conference also weighed in claiming the ads encouraged “a frivolous attitude towards the ethical values of the Christian faith”. The company’s subsequent appeals to higher (but still earthly) authorities fell on deaf ears with the Supreme Administrative Court declaring the ads “contrary to public morals”.

However, the company didn’t give up and the case eventually went all the way to the European Court of Human Rights. Finally, on 30 January 2018, the ECHR held that the Lithuanian government had interfered with the company’s Article 10 right to freedom of expression. Whilst the court acknowledged the complaints generated by the ads, it highlighted the fact that Article 10 applies equally to offensive and inoffensive ideas, so the rights of an "offender" have to be delicately weighed against the rights of the "offended". In any case, the court found that the ads were neither gratuitously offensive nor profane.

So, almost five and a half years after the original ad campaign, the company was vindicated. Would things have gone so far here?

The CAP Code, which applies to non-broadcast advertising, says that ads must not contain anything likely to cause serious or widespread offence and that care needs to be taken to avoid causing offence on the grounds of religion. However, ASA decisions over the years show that brands which take a light-hearted, humorous approach to religion can stay on the right side of the line provided they do not, for example, stray into disrespect or mockery or combine religion with sexualised imagery.

Nevertheless, the ASA has upheld complaints against ads featuring depictions of Jesus in the past .

An online gambling company was sanctioned for its 2014 FIFA World Cup ad which featured the statue of Christ the Redeemer in Rio de Janiero with one arm flung around a scantily clad woman and the other clutching a bottle of champagne.

Another ad was sanctioned for showing a Christ-like model with the message “lead me into temptation” pasted across the groin area.

There have also been numerous complaints about ads based around Leonardo Da Vinci’s painting The Last Supper, although the only one to be upheld was against a gambling ad featuring the dinner table substituted for a roulette table.

Use of biblical or ecclesiastical language can also cause problems, depending on the context.

The ASA has upheld complaints against ads featuring the line “Holy Mother of Christ” and “We believe in salivation", although the latter was accompanied by an image of two priests on the verge of kissing – hence the crucial role of context.

Guidance issued by CAP also warns about phrases like “Oh my God!” which is considered blasphemous by some religions and likely to prompt complaints. This is relevant in the Lithuanian case because the company claimed that it was using the names “Jesus” and “Mary” as emotional interjections (i.e. in an “Oh my God!” or “Holy Mother of Christ” kind of way), which it claimed to be common in Lithuania.

On balance, the end result seems like the right one. It’s perhaps surprising that it has taken nearly five and a half years to get there, but it just goes to show the strength of feeling that can be generated when religious symbols, imagery or language appear in an ad. For the advertiser, it seems that good judgement is key, but complaints are to be expected, whether justified or not.

"... the authorities gave absolute primacy to protecting the feelings of religious people, without adequately taking into account the applicant company’s right to freedom of expression." 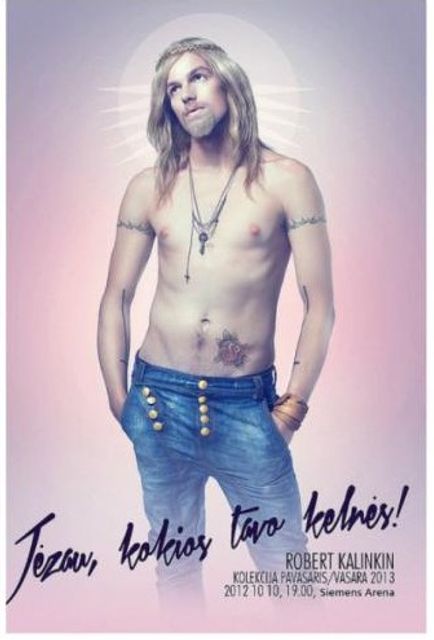