The ASA published its Annual Report on Wednesday, 3 June 2020.

The ASA resolved a total of 34,717 complaints about 24,886 ads in 2019. Of these, 16,767 complaints were made in relation to online ads while 9,971 corresponded to TV ads. These figures are not radically different from 2018, which was a bumper year for complaints, but influencer related complaints made up a very significant proportion of the ASA's caseload.

In fact, one in four complaints about online advertising submitted to the ASA in 2019 took issue with sponsored influencer posts.

Lord Currie explains that "Our five-year  ['More Impact Online'] strategy outlines the ASA’s commitment to continue our rebalancing away from reactive complaints casework and towards ‘collective’ regulation and proactive tech-assisted intelligence gathering, complaint handling, monitoring and enforcement. We’re one year in, but already have some exciting examples of how we’re using technology and research, including our groundbreaking use of avatars, to boost our proactive monitoring and compliance actions. This report also outlines our plans to develop our data science and machine-learning capability to deliver a step change in the way we regulate."

The ASA is working with other organisations, including their counterparts overseas - which is one way of dealing with online complaints which might otherwise escape the UK ASA's jurisdiction. Within the UK, the ASA is supported in its work by a range of regulators which act as back-stops. Those regulatory bodies include Trading Standards, the Competition and Markets Authority (CMA), the Gambling Commission, Ofcom and the Information Commissioner’s Office (ICO).

Looking to the future, Guy Parker, Chief Executive of the ASA, states that the ASA has some "exciting plans" to invest in data science and applying machine learning to aid the ASA in regulating advertising, marketing and commercial social media posts.

We are not sure if that will excite advertisers (even the most compliant advertisers) as much as it does the regulator, but it's clear the UK is set to remain a country which sets high standards for advertising compliance. The ASA intends to rigorously enforce those standards, even without the power to impose financial penalties on those who get it wrong, and they don't plan to wait for a consumer or competitor complaint to come in before they take action.

The full report can be accessed here.

ASA chief executive Guy Parker said: “Harnessing innovative technology to tackle misleading or irresponsible ads is playing a big part in helping us deliver more effective regulation for consumers and business. “And we have some exciting plans ahead, including investment in data science and machine learning. All of which is enabling us to be more proactive and fleet of foot in delivering our ambition to make UK ads responsible, wherever they appear.” 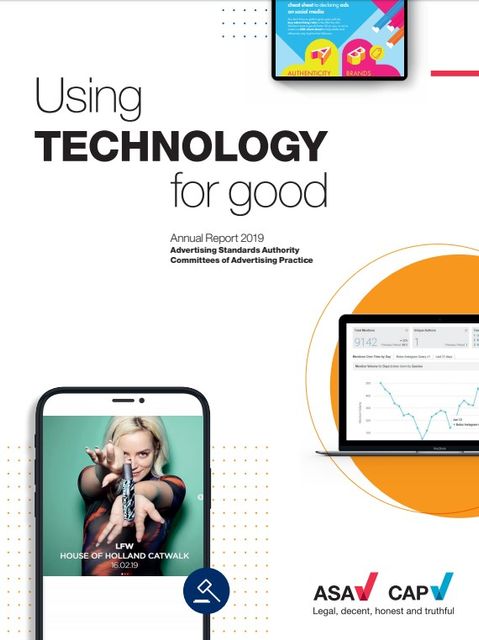