Despite grappling with the issue of disclosures by social influencers for several years now, the UK regulators (i.e. the ASA and CMA) still aren't able to sleep well at night.

Unusually, soothing herbal tea has been stressing them out and keeping them up!

It seems that the platforms themselves are just as listless. They are frustrated by the lack of consistency and clarity in this area, despite their laudable efforts (and those of some responsible influencers and brands) to come up with a bespoke solution, suited to their own platform and audience.

Each  platform is different and constantly evolving. And different  influencers have very different audience, so trying to impose a 'one size fits all' approach just doesn't work.

Of course we need some kind of minimum standard, and "#ad" is a quick fix for now, but is it always the best and only solution? Probably not.

Social media platforms are global too, so they need to keep the American FTC happy, as well as the UK regulators, and a patchwork quilt of other countries' regulators. For the time being #ad is a reasonably safe default position in the UK.  But that doesn't mean platforms shouldn't experiment with a better, clearer way of delivering the message to their users.

After all, they share the same goal of protecting and maintaining user trust. The regulators need to take a pragmatic, flexible approach, and engage with influencers, brands and platforms - without resorting to clunky disclaimers, intrusive pop ups or meaningless symbols to resolve this issue.

In any case, let's hope this whole thing is put to bed soon, because we're all getting pretty tired of it.

**In this case, the post was updated to include #ad

The ASA said it is planning its own research into the way this kind of advertising appears online, with more details to be issued later in the year. [There's] an increased crackdown by watchdogs on social media stars and advertisers who fail to correctly disclose content as being sponsored. In the UK in particular the nuances of policing the influencer space have been explored by the Competition and Markets Authority (CMA) and the ASA's regulatory arm the Committee for Advertising Practice (CAP); which issued a fresh set of guidelines for advertisers and creators in March. The ASA has spiked several influencer campaigns this year across various platforms, including an Instagram post from makeup blogger Sheikhbeauty. In June, the blogger shared an image promoting herbal brand Flat Tummy Tea with her 350,000 followers without making it clear it was an ad. 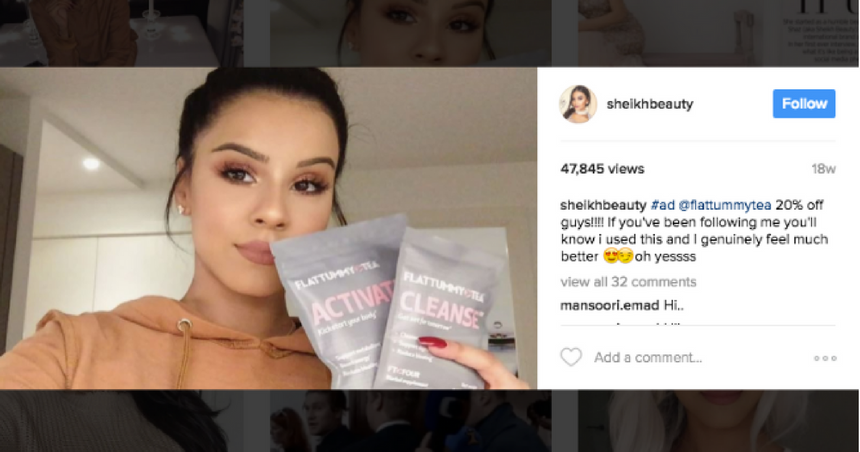 Why it's important to have a good contract with your influencers. @ISBAsays has template terms for influencers. https://t.co/JET5N5WAfd

I'm so honored to be amongst such an august panel of Influencers and Global Leaders at the highest level... #UNGAhttps://t.co/dal6YlKHax pic.twitter.com/6GLCsoN0OV