It isn't easy to run a pub these days. Hundreds are closing each year. So on one level, one has to have sympathy with the plucky little owner of the Buck Inn, County Durham, who is clearly fighting on all fronts to keep his business going. One weapon in his armoury are themed nights, such as Tapas Night and Mexican Night. And to coincide with that most famous of all celebrations of beer, the Oktoberfest, German Night.

Unfortunately, to promote German Night, he used a poster that fell back on every sad, boring, tired and anachronistic trope about Germany and the Germans known to man. Well, to Little Englishmen anyway. Take a picture of Adolf Hitler performing the infamous Nazi salute, superimpose a cartoon of the head of the landlord cum chef, add the famous Basil Fawlty line, "Don't mention ze war", and bingo! Comedy Gold! Or not, as the case may be. To quote that other fictional hero of British Comedy and master of sarcasm, Edmund Blackadder, "the cold winter nights must just fly by" at the Buck Inn.

Three people complained to the ASA that the ads were offensive, focussing on the use of the image on the pub's Facebook page. The Buck Inn argued that 3 complaints out of 500,000 views on Facebook could not amount to serious or widespread offence. The ASA disagreed and their analysis is interesting. Unsurprisingly, they decided that the ad trivialised the war and the Nazis, but they also concluded that the intrinsic linkage of German culture to the Nazis and the war was likely to cause serious or widespread offence.

Which prompts another reference to a John Cleese comic creation: apart from the Nazis and the war, what else have the Germans ever given us? Apart from Bach. And Becker. And Beethoven. And Benz. And Brahms. And Brecht. And Goethe. And Kant. And Luther. And Schumacher. I could go on. But instead, the Buck Inn chose to represent German culture by a reference to a period in its long and illustrious history which lasted 12 years. Illustrated with a picture of an Austrian!

The ASA also criticised the Buck Inn for 'liking' all the comments on its Facebook page, including some which were far more offensive than their own poster. Sadly, some of those posts are still there today.

So yes, 3 complaints can constitute serious or widespread offence. It's a shame that the ASA's investigation inevitably gives this nasty little campaign the oxygen of publicity, but that cannot be a reason for the ASA to shirk its responsibilities. The ASA has considered related issues in the past, concluding that Shepherd Neame's ads for Spitfire beer were funny but not offensive. As opposed to this one, which is offensive but not funny.

Three complainants challenged whether the ads were offensive. 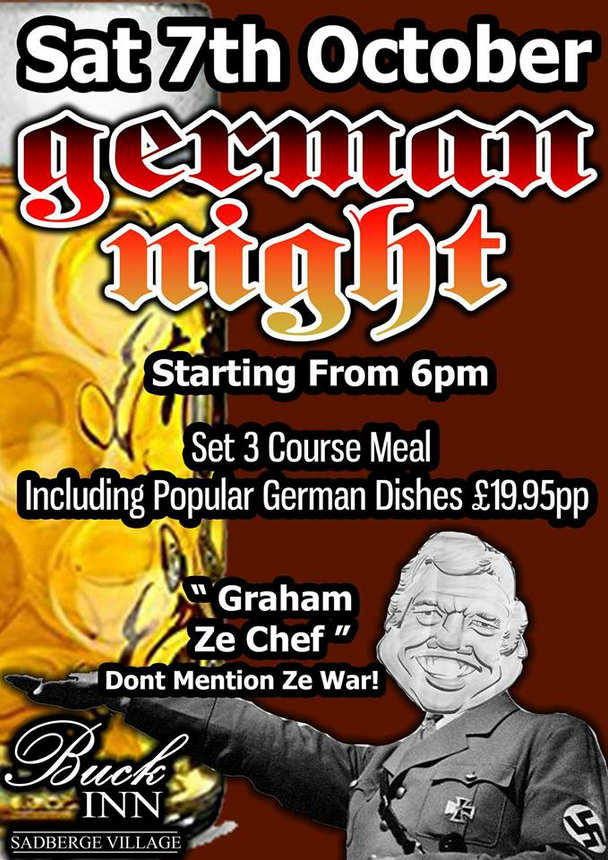