When negotiating with procurement, it sometimes feels like they only want to pay peanuts for advertising services. And what do you get when you pay peanuts? Monkeys.

But that may no longer be such a problem for procurement, following the decision of the United States Ninth Circuit of Appeals, confirming that animals, whether simian or otherwise, cannot own copyright. The Court also took the opportunity to pour scorn on the attempts of PETA, People for the Ethical Treatment of Animals, to act as the next friend of the animal central to this case.

If you've been off in the wilderness for the last 7 years, you may be unaware of this this particular jungle story. It concerns a photographer, David Slater, who set up some camera equipment on the jungle floor, which resulted in Naruto, a Sulawesi crested macaque, taking his now infamous selfie. After Slater published the image in a book of photography in 2015, PETA rushed to the defence of Naruto, bring copyright proceedings on his behalf as his "next friend". Or, according to the Court, cynically exploiting Naruto for its own purposes, in a spectacular example of the application of the judicial boot to an unmeritorious claimant.

We now know that the Sulawesi crested macaque is quite a decent photographer, who cannot demand payment, even in peanuts, for an assignment of copyright of his work. This creates exciting possibilities for the world of procurement. Royalty free artwork for peanuts. A dream come true!

But what about the copy? Who will write the copy? Never fear, because according to the Infinite Monkey Theorem, a monkey that is left to bash the keys on a typewriter keyboard will, eventually, produce the works of Shakespeare. And using a modern word processing programme, he might even be able to avoid Shakespeare's notoriously poor spelling. On that basis, knocking out a few lines of advertising copy should not be beyond the wit of monkey. Or as a meerkat would say, "Simples!"

Procurement will be delighted. Eventully, they'll own both the artwork and the copy they want, free from any usage rights restrictions, all for the cost of some peanuts. Probably quite a lot of peanuts, but peanuts nevertheless.

Let's just hope that procurement don't insist that time is of the essence.

Puzzlingly, while representing to the world that “animals are not ours to eat, wear, experiment on, use for entertainment, or abuse in any other way,” PETA seems to employ Naruto as an unwitting pawn in its ideological goals. 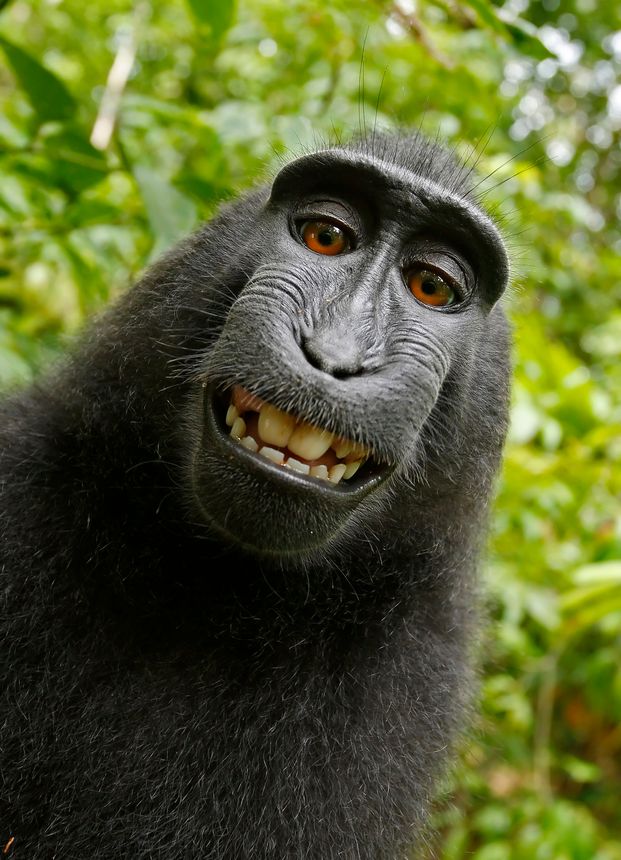 Denying Naruto the right to sue under the U.S. Copyright Act emphasizes what PETA has argued all along—that he is discriminated against simply because he's a nonhuman animal.

It has been ruled... monkeys can not own copyrights. Sorry Naruto.https://t.co/2AtYd0IdlL pic.twitter.com/mYqFMzQ1f4