The FIFA World Cup has seen a proliferation of ambush marketers - advertisers who are not sponsoring either the event or any of the teams, but who are nevertheless jumping on football fever bandwagon - making the most of consumer passion for the beautiful game.

Agencies and brands have become more adept at drawing the line between football themed ads which FIFA cannot legally challenge, as opposed to ads which over step the mark, suggesting an association with the event or one of the teams. As such, in the UK, we've seen plenty of 'ambush' marketing on our TV's so far this tournament but I'm not aware of any action in the courts seeking to curtail any of the campaigns.

In Russia, where strict 'anti-ambush' laws have been introduced especially for the tournament, the situation is more hostile for brands trying to muscle in on the 'big games'. Against that backdrop, it is even more extraordinary that the Russian arm of Burger King, driven by the lack of quality in the Russian team, created a campaign on a local social media channel offering Russian women a lifetime of meals and a cash prize if they were impregnated by a World Cup player. Yes, you did read that correctly!

While national pride is often used as a tool in ambush campaigns, aiming to improve the gene-pool of future generations of a country's players is a new one to me. And while ambush marketing can often result in the most creative campaigns, this one clearly deserved a yellow card, or even a straight red.

The campaign was swiftly removed, which makes me wonder if it was just the result of one person's bad judgment and inadequate internal social media controls.  'Reactive' ambush marketing is becoming more common, so this an area of increasing risk, although there were some great examples in the 2014 World Cup when Suarez bit the shoulder of Chiellini, including from Peperami and Snickers. Marketing Directors need to ensure their teams understand the do's and don'ts from both from a legal and a PR perspective and put in place proper sign-off processes. Failure to do so could easily lead to a campaign being sent home early. 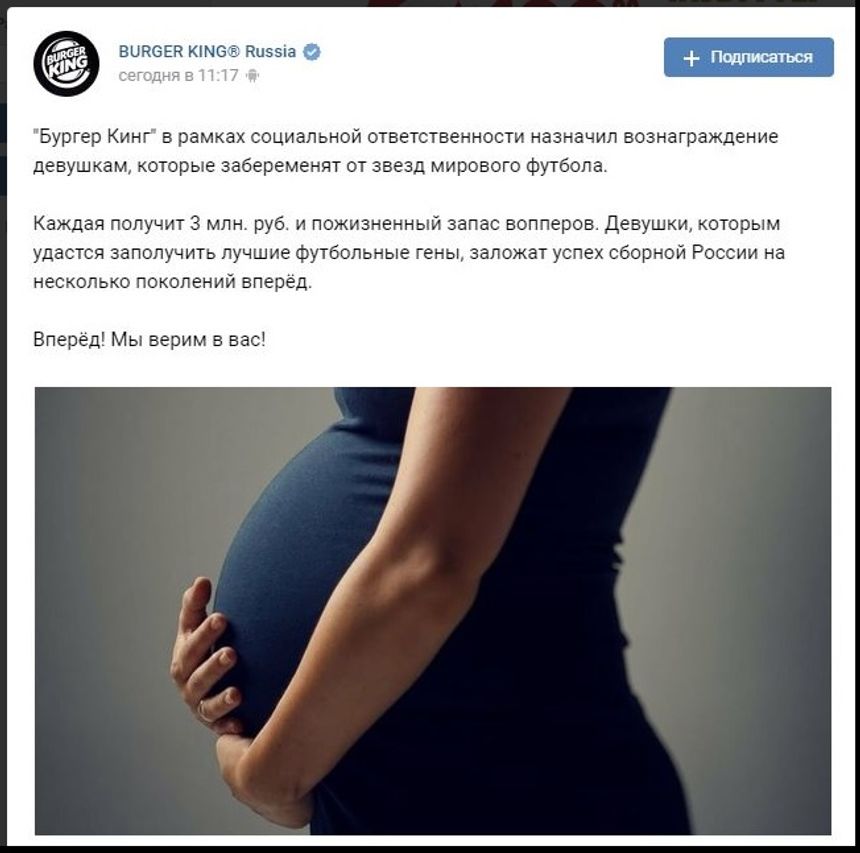 Burger King's Russia franchise have had to apologise after they did a social media campaign offering a lifetime supply of Whopper burgers and 3 Million Russian Roubles to women if they get impregnated by footballers during the World Cup!

The Russian arm of Burger King has apologised after offering women a reward if they got pregnant with a World Cup player's baby.