The Advertising Association, Nabs and Wacl, backed by the IPA and ISBA, have called #timesup on sexual harassment in the UK advertising and marketing industry.

Today, they published a report which contains some disturbing statistics, reflecting the scale of the problem. They also set out a new Code of Conduct for the industry, which is designed to tackle it head on.

The vast majority of those who have experienced sexual harassment have been harassed by someone senior to them (82%).

We welcome the report and Code of Conduct.

Find out more at www.timeTo.org.uk

As is mentioned in the Code of Conduct, employers can find free guidance and policy documents to help them make a lasting change, here.

The research, based on a survey of 3,580 people working in the UK advertising and marketing communications industry, revealed that sexual harassment in advertising is far from being a past relic of a bygone age. Kerry Glazer, president of Nabs, outgoing president of Wacl and chief executive of AAR, urged the industry to take positive steps forward in making things better, safer, respectful and equal for all. "By having a clear code of conduct we aren’t setting out to create controlled, humourless offices but to ensure that no one’s dignity is undermined by some else’s behaviour," Glazer said. 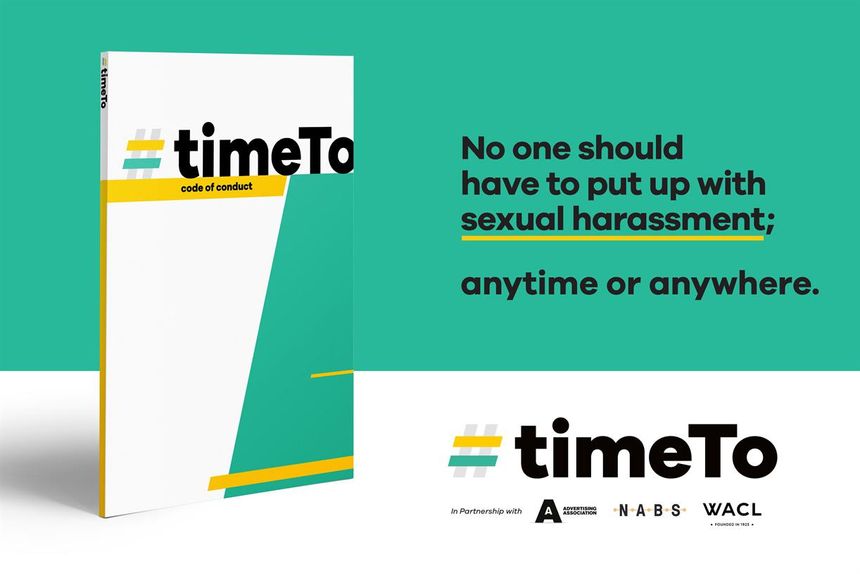 When you have sat across the table with young girls who have signed NDAs they don't understand following horrendous experiences of sexual harassment it is glaring obvious that its #timeTo change. The culture of NDA's and cover-ups…https://t.co/1xIdBElHVf https://t.co/vbBCK9yAbJ

We support #TimeTo as it calls #timesup on sexual harassment in ad industry. 20% of female 18-24s surveyed have already experienced sexual harrassment in the workplace vs 5% of men https://t.co/TriaXIpPFk via @campaignmag

Super proud of @hattiehats and others who have made this happen! Thank you. #timeto https://t.co/fyO8ZGoWSn