I'm sure you're getting as bored of reading these updates about the use (or failure to use) #ad as we are of writing them, but this week saw the publication of yet another upheld ruling by the ASA.

This time it was Daniel Wellington and Made in Chelsea star Louise Thompson who found themselves in hot water... and I don't mean the Mediterranean!

Despite it looking blindingly obvious to most social media users that this was an ad (indeed, it must have been reasonably obvious to the person who knew to complain to the Advertising Standards Authority!), and despite the inclusion of the tailored discount code 'LOUISE', and despite the post adopting a different style compared with Louise's usual posts, the absence of a clear identifier (in particular '#ad') meant that the ASA upheld this ruling against both Louise and Daniel Wellington.

In fairness to Daniel Wellington, they had placed a contractual requirement on Louise Thompson which required that she included #ad in the post - but she didn't, so they were still held jointly responsible.

Talk about putting the boot in!

Daniel Wellington told the ASA that its contract with Thompson stipulated that she should use terms of disclosure such as #sponsored or #ad, and stated: “Daniel Wellington expected all of their ambassadors who had marketed Daniel Wellington products to ensure that they complied with applicable rules regarding marketing and that they took responsibility for designing their social media posts.” The ASA said that since Thompson and the watchmaker had signed a written contract, the post constituted marketing, and therefore fell under the remit of the code. It added that “in the absence of a clear identifier... we concluded that the post was not obviously identifiable as a marketing communication and that it breached the code.” 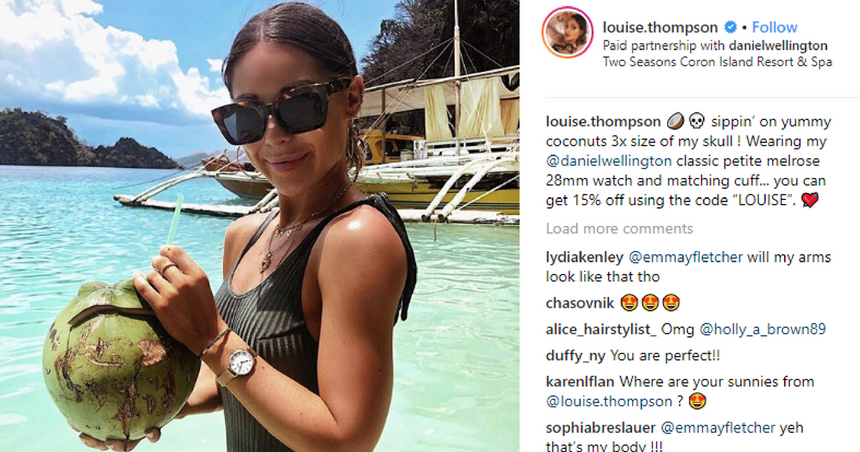