Much as everyone supports the principles behind the rules against advertising of HFSS (high in fat, salt or sugar) products to children, one cannot help having some sympathy for Kellogg’s today.  The ASA has ruled that the cereals company broke the rules on HFSS products with its ad for Coco Pops Granola cereal, broadcast during the children’s programme Mr. Bean.

The irony is that Coco Pops Granola is not itself an HFSS product. Indeed, Kellogg’s seem to have developed it specifically with a view to it being a healthier option.  Where Kellogg’s went wrong, according to the ASA, was emphasising the “Coco Pops” branding, including Coco the monkey and the phrase “look at the milk, it’s turning all chocolatey”, more than the new Granola product itself.  The ASA ruled that the ad effectively promoted the whole Coco Pops range of cereals. At the time the ad was broadcast, a majority of the range were HFSS products.  In a further irony, by the time of the adjudication’s publication this was no longer the case – Kellogg’s having implemented a planned reformulation of the original Coco Pops product (reducing the sugar content), which means it is itself no longer classified as HFSS.

The line between marketing that is or is not compliant with the HFSS rules can be very fine.  Just one day before the ASA’s adverse ruling against the Coco Pops Granola ad discussed above, Ofcom, the statutory regulator which regulates product placement and sponsorship deals on UK television, had ruled that Coco Pops Granola sponsorship credits run in the mornings on CiTV (the ITV children’s channel) did not breach the HFSS rules.  The animated brand character Coco the monkey was again used, and the milk again went brown, but Ofcom felt that in this case the new non-HFSS Granola product was the focus, rather than the Coco Pops range or brand.

No doubt the government would argue that Kellogg’s launch of the new Coco Pops Granola product – and the reformulation of the original Coco Pops– is simply a sign that the HFSS rules are doing their job.  It just seems a little hard on Kellogg’s that today’s news headlines imply that it hasn’t taken the message on board. Today's newspapers and broadcast are full of headlines about the ASA's decision that will be damaging to the Kellogg's brand, but you'll be hard pushed to find any media coverage of yesterday's Ofcom decision.

If food manufacturers are going to re-formulate their products away from traditional HFSS recipes and ingredients, they're also going to need to advertise the new, healthier variants. In which case, should they rely on the views of the self-regulatory organisation or the statutory regulator? The monkey or the organ-grinder? 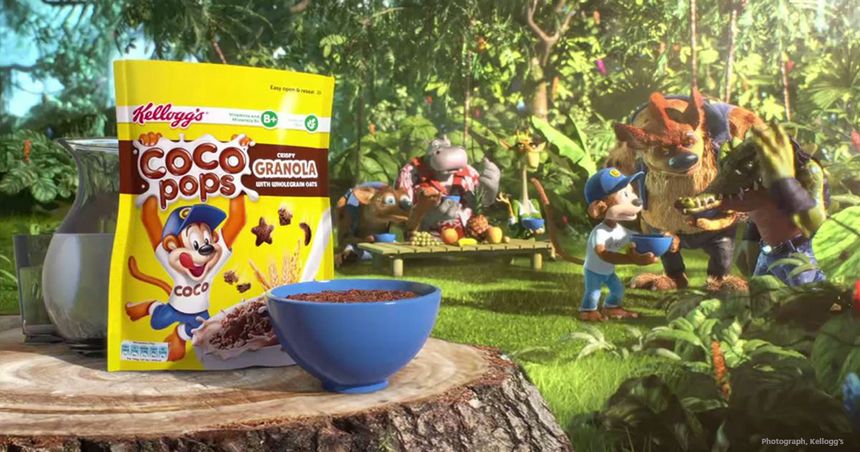