Risking Donald Trump's ire - though they're in good and plentiful company on that front - American mega-brand Nike have recruited Colin Kaepernick for the 30th anniversary of their 'Just Do It' campaign.

Kaepernick was one of the first sports stars to infamously kneel during the national anthem, in protest at police violence in the US against African-Americans.

It could be argued that this reduces a very serious political protest into a promotional brand campaign (something which Pepsi got so spectacularly wrong last year). However, Nike and Kaepernick seem to have managed to tread the difficult path of doing this in a way which is acceptably authentic and sincere.

Time will tell what the public (and political) reaction will be.

By taking a stand - or knee - Nike has exposed itself to a negative reaction from some vocal detractors; with early reports of some people posting photos of Nike clothes being set ablaze, Nike's share price has (at the time of writing) dipped two per cent.

Nike and Kaepernick do seem to be standing squarely behind the aphorism: "Believe in something. Even if it means sacrificing everything", though it's unlikely to be the making or unmaking of the well-established Nike brand.

Nevertheless, by getting behind this cause at this turbulent time, I, for one, salute them.

An American football star who sparked a furore by kneeling during the national anthem has been unveiled as one of the faces in a major advertising campaign. Former San Francisco 49ers quarterback Colin Kaepernick is appearing in Nike's "Just Do It" 30th anniversary campaign. In 2016 Kaepernick refused to stand for the anthem in protest at police violence against African-Americans. Other players followed suit but the protest has divided the country and sparked Donald Trump's anger. The US president has called players who "disrespect" the US flag "sons of bitches" and called for them to be sacked. Kaepernick has not played in the National Football League (NFL) since last year, and is suing the organisation, arguing team owners deliberately froze him out because of his activism. 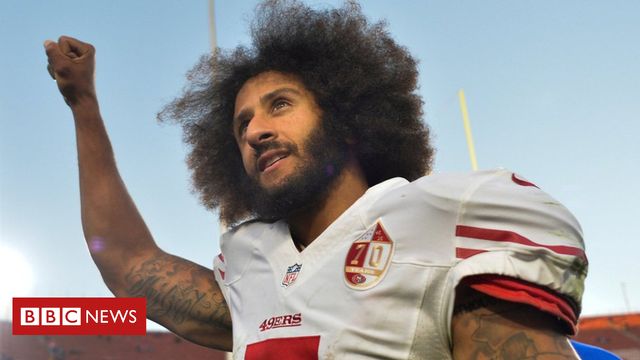 What do agencies need to consider if they want to require staff of undergo workplace testing for Covid-19?
Brinsley Dresden
repost  cancel