Existing ads for food and drink which are considered high in fat, salt or sugar (HFSS) will be phased out from today (those which are already up won't be removed for a short grace period).

But is this ban a positive step towards tackling obesity in the UK, or just a populist leap in the dark?

The ban is remarkable given that the benefits of this kind of ban on advertising (which covers ads aimed at adults as well as children), are largely unknown.

It also remains to be seen how this will impact the revenue derived from advertising on TfL real-estate, given that so much of it comes from these ads.

We wonder whether TfL will soon take a kind of approach adopted in France, which would lead to banning ads for any kind of product (from insurance to holidays) which show someone sipping from an unidentifiable fizzy cola, enjoying a plate of pasta with friends, or having a biscuit with their tea - shock horror!

Smart London hotels wanting to promote afternoon tea can forget it, and most restaurants will be left wondering whether they can promote their dishes on TfL real-estate.  Salad and sparkling water anyone?

In the meantime, it's important to remember that TfL's ban covers more than just the London Underground, and buses and train networks run by TfL. Junk food adverts will also be banned on the following:

But will the Mayor put his money where a commuter's mouth is by banning the sale of unhealthy food, drinks and sweets at every tube, coach and train station in London too...?

A ban on junk food advertising across London's entire public transport network has come into force. Posters for food and drink high in fat, salt and sugar will begin to be removed from the Underground, Overground, buses and bus shelters from Monday. Some adverts for unhealthy products could remain on the network for a while as some companies have booked advertising space for long periods. All future bookings are subject to the new policy 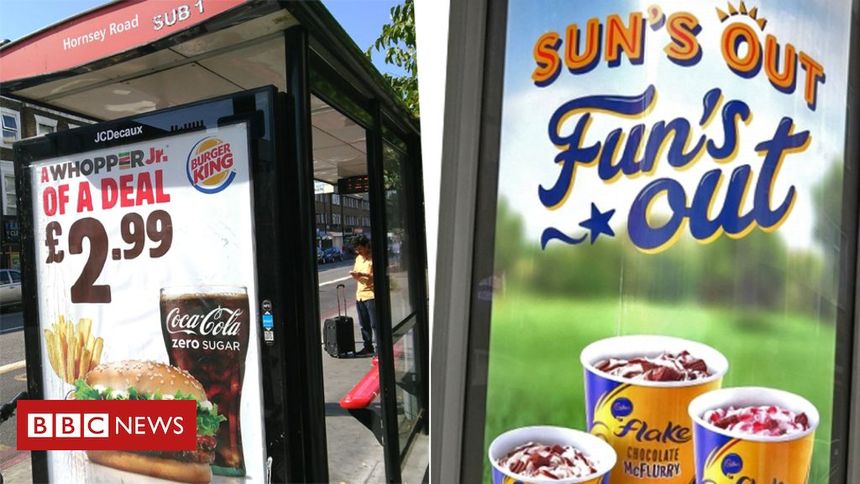 A ban on so-called junk food advertising on public transport begins in London today. It shows that if you give local politicians a limited number of levers to pull, they will pull them all. https://t.co/uGmx2qjXj8

A ban on junk food advertising across London's entire public transport network has come into forcehttps://t.co/ZR5sawRV5d

Great to have a London Mayor taking this seriously. Childhood obesity is on the rise but the Government have cut 35,000 hours of secondary school PE.https://t.co/7XZSWJM2M8