It's arguable that the rule itself does not particularly advance the cause of gender equality, given that the existing widely cast rule that says ads "must not contain anything that is likely to cause serious or widespread offence". This probably already did the job. However, the ASA has done some detailed research on the harm done by gender stereotyping, which is not in doubt, and so having a specific rule to shine a light on the issue may be no bad thing.

The real value in the ASA's initiative comes from the detailed guidance to the new rule, which is helpful.

It's also important to remember that the ASA rules on sexualisation and objectification, as well as body image and sexualised portrayals of under 18's remain very much in force.

You can show people in gender-stereotypical roles but you must avoid suggesting that the stereotypical roles or characteristics are uniquely associated with one gender. You can feature glamorous, attractive, successful, aspirational or healthy people (like me, for example!) but avoid suggesting that happiness or emotional wellbeing depends on conforming to an idealised gender-stereotypical body image (like mine? Perhaps not). Leave that to Love Island. And you can target a specific gender in your ads, provided you don't suggest that a particular children’s product, pursuit, activity, choice of play or career is inappropriate for one or another gender.

Ads should also be sensitive to the well-being of vulnerable groups and so not mock people for failing to conform to gender stereotypes, even in a 'humorous' context. The ASA has warned that trying to defend complaints about alleged breaches of this rule on the grounds that the ad is ‘banter’ is unlikely to cut much ice.

To be clear, I think that gender stereotyping is a bad thing, just like everyone else that is likely to be reading this blog. Not just in advertising, but in life. And there are countless examples of the portrayal of women and girls in advertising that are harmful. Readers may recall my tirades about American Apparel. But while there are numerous examples of complaints that have been upheld on the grounds of sexualisation, objectification, body image and the sexualised portrayal of minors, there are few, if any, on the issue of pure gender-stereotyping.  When 620 people complained to the ASA in 2012 about the ASDA Christmas ad that showed a typical housewife doing all the work to lay on a family Christmas, the ASA decided not to uphold the complaints.

Most advertisers already try hard to avoid harmful  gender stereotyping. Occasionally, they may get it wrong, as GAP did with the ad used to illustrates this post, but they withdrew it pretty rapidly in the face of a backlash on social media and without any intervention from the ASA.

So we will report back in a year's time about the number of investigations that have been made under the new rule. Of course, if the answer is nil, then ASA might reasonably say that is because the rule has done its job.....Let's hope so.

Rule 4.9: Marketing communications must not include gender stereotypes that are likely to cause harm, or serious or widespread offence 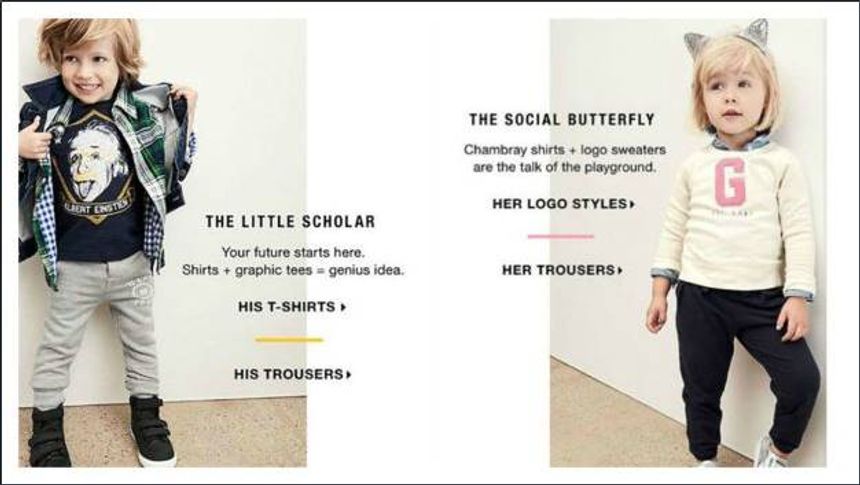 Hi, thanks for getting in touch. We agree, it's important that we approach this issue and administer the new rule in a balanced and proportionate way. The new rule, guidance and what this will mean https://t.co/xjrHMmyTic

Our new rule prohibiting gender stereotypes that are likely to cause harm or
serious or widespread offence comes into force on 14 June 2019. Here’s a
reminder of some of the key things to bear in mind https://t.co/Gy8Iuy7kCe pic.twitter.com/wwz0U32TWq