Posts by Katie Price, Georgia Harrison & Lauren Goodger showing unrealistic waist lines and unauthorised health claims have been banned by the ASA for being irresponsible and in breach of the CAP Code.

An ad is an ad and it’s regulated no matter how it is promoted. Instagram posts don’t get special treatment and neither do #advertisingclaimsinhashtags.

Ms Harrison, 22, (Love Island season 3) claimed “V24 Gummies are great a helping you loose [sic] weight…V24 Gummies made dieting so much easier. They’re delicious and when taken with water they suppress your hunger craving.…#diet..”

What would a consumer take from the ad? It was clear that Ms Harrison did not need to lose weight to achieve a healthy weight.

The ASA considered that the message might be that those who aspire to Ms Harrison’s body shape should use products that suppress their appetite. And they concluded that it was not okay.

Is that really her waistline?

They were also concerned that the photos of Ms Harrison appeared to be altered to make her waist look artificially thin with the result that the images were not representative of her real body shape. In the context of an appetite suppressant, that was deemed particularly irresponsible as it’s clearly not the weight they achieved but aspire to.

In a separate decision, the ASA noted that Ms Goodger’s image promoting the Boombod shots also appeared to also be edited to make her waist look artificially thin. These images were both held to be especially irresponsible.

They also did not like DJ Melissa Reeves’ comment (on the boombod account) that the product made her feel “more confident too”.  These words next to an image of Reeves looking slim before and even slimmer after, sends a message to slim women that if I take appetite suppressants, I can become more confident… Also irresponsible.

Only health claims that are listed on the EU Register of authorised claims can be made in ads promoting foods, including food supplements. That includes Instagram posts and #claimsinhashtags.

In the context of an energy-restricted diet, products with at least 1g of glucomannan can contribute to weight loss. You can therefore make that claim so long as the product includes 1g & you also include other information such as choking risks.

No evidence was provided of the products’ dosages, and in any case the additional information was not included for either product. The claims for both products were therefore in breach of the Code.

The ASA further scrutinized the general health claims made in the ads, such as “I feel more fit and toned” or #healthylifestyle #beachbody #lean. Such claims can only be made if accompanied by a relevant authorised health claim. As they were not, these claims, including those settled within a hashtag, were also in breach of CAP Code.

The ads were banned and both advertisers were told not to promote diet products in an irresponsible way again.

In September 2018 the ASA published guidelines for influencers on how to make it clear their ads are ads. They include a small section on page 12 on ‘other rules’ applying to the likes of food but to be fair it does not go into any detail. Instead it links to the CAP codes themselves which are lengthy and in legal speak. This is however not an excuse so make sure you do your research before you post.

It was clear from the ads that Georgia Harrison did not need to lose weight in order to achieve a healthy weight. We considered that the overall message of the ads was that she nevertheless used the product on an ongoing basis to help her limit her calorie intake. 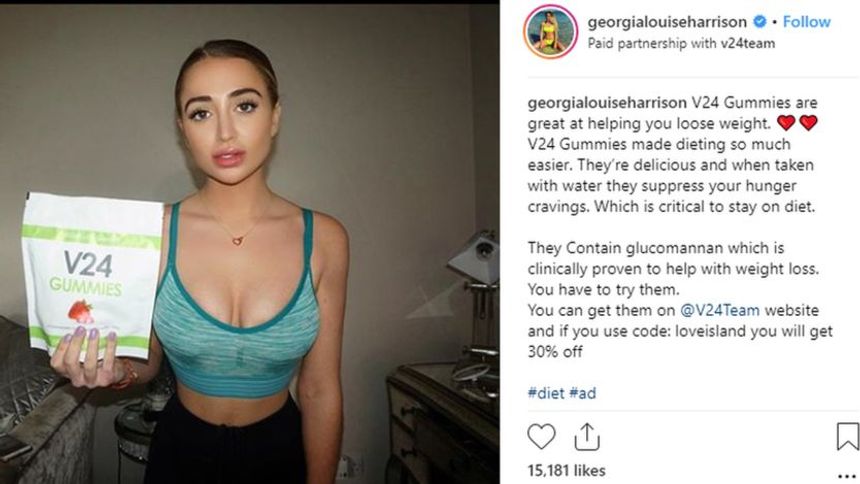 Two @ASA_UK rulings against food ads making unauthorised health claims. If it’s not on the list it shouldn’t go in! https://t.co/3rkcAorxEB https://t.co/xuVtVMtfwq

Health claims must have the same meanings as those on the authorised register ... https://t.co/Gr9sHPIrAY