Advertisements by the Department of Work and Pensions (DWP) have been investigated by the ASA for being misleading.  Most of the complaints were upheld.

The DWP said the ads were intended to raise awareness of the benefits that claimants may be entitled to, and to help them find further relevant information.

One of the points of complaint was that the ads were not clearly labelled as marketing communications, and could be confused with editorial.

The five press ads were labelled: “ADVERTISEMENT FEATURE FROM THE DEPARTMENT FOR WORK AND PENSIONS” at the top of the page, albeit in relatively small and not fantastically prominent text. However, the ASA did consider that the label in each of these ads was sufficiently clear and prominent in all the press ads and therefore readers were unlikely to overlook it.

The ASA considered there were a range of elements in the ads which had the potential to create some ambiguity as to whether or not they were ads or editorial; for example, they included 'Myths' and 'Facts', and they included a magnifying glass graphic and implication that the content was an exposé, the lack of reference to the DWP in the body of the ad, and the general editorial style. However, the ASA concluded that because the label referred to the DWP and was sufficiently prominent, overall it was unlikely to be overlooked. Also, the ads were of a different style to typical editorial layouts in the Metro, most of the press ads were obviously identifiable as marketing communications.

However, an online ad was misleading. It included the same label as the press ads but it was in a small, sentence-case, non-bold font on a light grey background, and the MailOnline and Metro.co.uk logos appeared just underneath it in much larger font, with the magnifying glass graphic to the right. A bright green navigation bar underneath included links to different sections of the web page. Those elements, including the label, remained visible as website visitors scrolled down the long web page. However, the ASA concluded that the label was not prominent compared to the logos, graphic and green navigation bar and readers were therefore likely to overlook it.

Several of the claims were considered materially misleading by the ASA.  For example, the ads contained claims such as:

FACT It does. People move into work faster on Universal Credit than they did on the old system

In relation to this claim, the DWP said that UC claimants were 4% more likely to have been in work at some point in the first six months of making their claim than people on legacy benefits. It provided some reports and statistics on which the claim was based.

The ASA was not convinced that the substantiation was adequate to prove the claim was true and not misleading, and the ASA noted that the success rate included data on people who had moved into temporary roles within this period, even some who had worked for just a few hours’ casual labour, rather than people who had gained full-time employment.

Other claims which appeared in several of the ads were also considered misleading. For example:

Read all about it 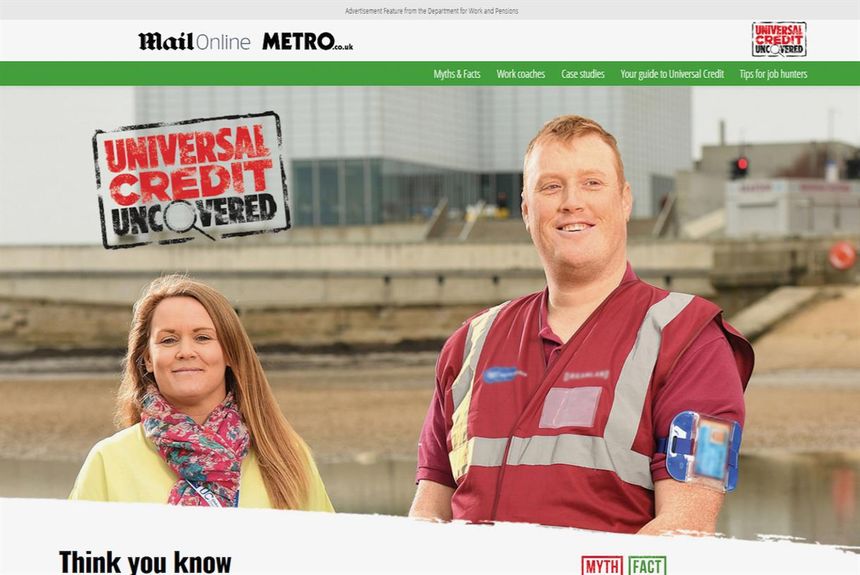