Recent advertising and marketing tactics by political parties (and political movements) in the UK range from questionable to downright unethical.

They would put the most bullish or aggressive advertiser to shame, and would land any commercial entity in hot water with the ASA (Advertising Standards Authority) and possibly even the CMA (Competition and Markets Authority).

So how do political parties seem to get away with this kind of activity in the run up to an election or referendum?

It's a perennial question, but one which seems more and more pressing.

In the UK, the focus is shifting from external meddling by rogue nations to the unabashed and unbridled activities of our home grown political parties.

But the pressure for accountability is mounting.

On Tuesday evening this week, during the first in a series of live televised debates between Boris Johnson and Jeremy Corbyn, the @CCHQPress Twitter account (i.e. the Tory press office), was rebranded "factcheckUK", and, in smaller text: "FROM CCHQ". 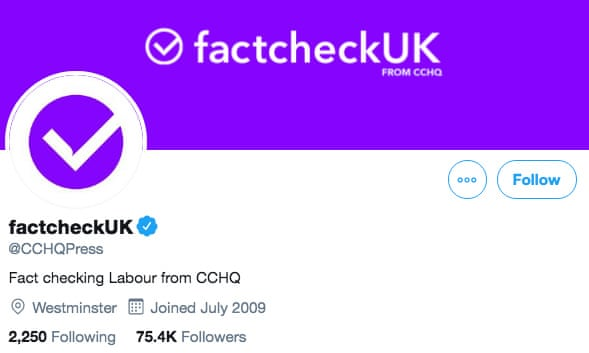 After the debate, the account reverted to its original branding: 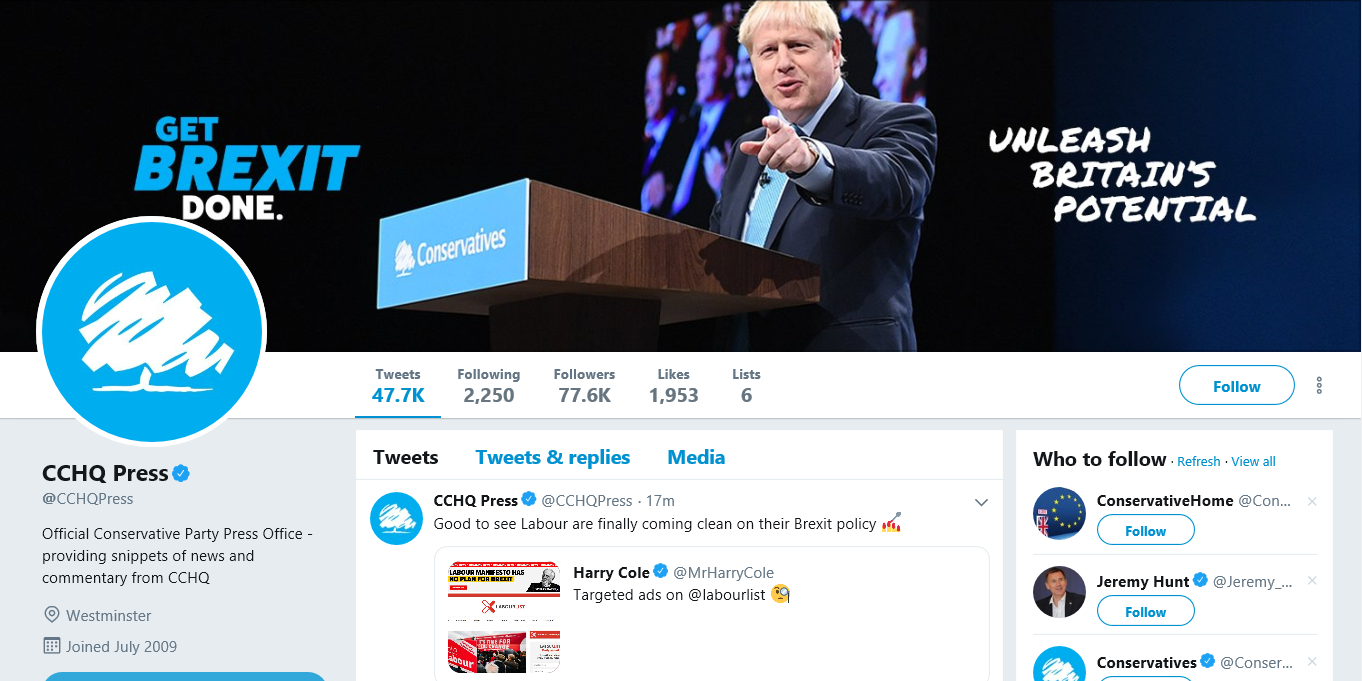 Twitter (which is due to ban all political advertising from 22 November) has spoken out against the Conservative Party, saying that these temporary changes were misleading. Although it took no action this time, Twitter said it would take "decisive corrective action" if a similar stunt was attempted again.

Many have criticised this activity, with some arguing that it doesn't reflect well on the Conservative Party, the UK Government, or on the UK's political system.  However, Conservative Party chairman James Cleverly defended the activity, telling BBC Newsnight: "The Twitter handle of the CCHQ press office remained CCHQPress, so it's clear the nature of the site." He claimed this was all done to hold Labour's feet to the fire, but he did not directly address why it was necessary or desirable to rebrand the CCHQ Twitter feed in order to challenge Jeremy Corbyn's claims.

Dominic Raab played down the incident when asked about it by the host of BBC Breakfast. He said: “I knock on doors every day... no one gives a toss about the social media cut and thrust. What they care about is the substance of the issues.”

Unsurprisingly, Labour's David Lammy didn't share that view. He called on the Electoral Commission to investigate and punish what he called “a blatant attempt to deceive the public”. However, the Electoral Commission is not equipped or able to regulate the content of political advertising. In a statement, the commission made clear that: “Voters are entitled to transparency and integrity from campaigners in the lead-up to an election, so they have the information they need to decide for themselves how to vote.  While we do not have a role in regulating election campaign content, we repeat our call to all campaigners to undertake their vital role responsibly and to support campaigning transparency.”

So, are all the usual advertising rules suspended at the moment?

If you represent a company or charity, given the current economic climate, you might be tempted to follow the questionable example set by many of the UK's political parties. But before you do, remember that 'political advertising' is exempt from virtually all of the rules which would land a commercial entity (or charity) in hot water.

An ordinary company or charity's ads have to be 'legal, decent, honest and truthful'. They must not mislead by act or omission. Surprisingly, political advertisements are not bound by these same principles.

If a company were to, say, rebrand its Twitter feed in a way which made it confusingly similar to an independent fact checking service, and questioned claims made by its main competitor, it is very likely that such a company would be investigated and found to be in breach of (a) the CAP Code (enforced by the ASA) and/or (b) consumer protection legislation (enforced by Trading Standards and the CMA). In the latter case, it could result in prosecution, legally binding undertakings, and ultimately a significant fine.

Why doesn't the ASA step in?

There are good reasons why the ASA does not fill this regulatory vacuum in order to hold political parties to account. The ASA understandably doesn't want to be viewed or treated as a political tool. Also, on a practical note, an investigation by the ASA can take several weeks or months, by which time an election or referendum would be over, so it is not likely to be a particularly effective regulator.

All interested parties agree that it is a complex area where nothing more than a light regulatory touch would be appropriate, to avoid stifling genuine political discourse and debate.

If we do go down this route, it is likely to take many years to draw up the rules and principles which should apply to political adverts.  But as a starter for ten, they wouldn't go far wrong if they were to apply the tried and tested formula: Ads should be 'legal, decent, honest and truthful' and 'not materially misleading'.

Whether or not such ads have to be pre-cleared would need careful consideration.

Any regulatory action would need to be measured and proportionate, but swift and decisive.  A difficult job, and one best suited to a stand-alone, independent regulator, which is established specifically to investigate and rule on political advertising in the run up to an election.

It will not be easy to draw up and enforce rules in this area, but it seems clear that if the political parties will not hold themselves to a high enough standard, regulation of some kind will be necessary in order to save the political process from itself.

Will Moy, chief executive of the independent fact-checking charity Full Fact said of the campaign: "It was an attempt to mislead voters and I think it is inappropriate and misleading for a serious political party to behave that way." "And it’s surprising as well. Why would a self-respecting political party choose to impersonate something else to put its campaign messages out there?" 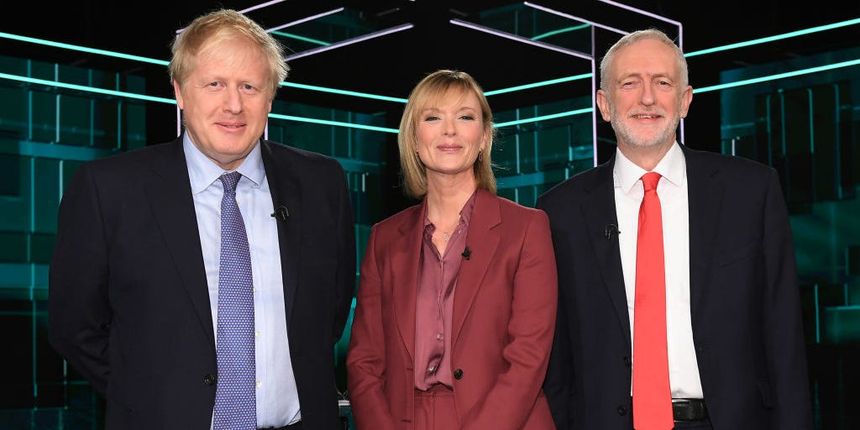