For people who are supposedly trying to keep a low profile, it's proving very difficult to avoid press coverage about Harry and Meghan, the Duke and Duchess of Sussex. And God knows I've tried. Since December, I have religiously avoided every press article about two subjects: Brexit and Megxit. And if either subject comes on the radio, I make a point of shouting at it for entire duration of the news piece. This has left me hoarse, but sane. Well, kind of.

One news item this weekend did, however, demand my attention.  Hagan Homes, a house building company based in Northern Ireland, have attracted the ire of the Royal Household (or should that be former Royal Household?) over a couple of ads in their 'Fit For Part-time Royalty' campaign, featuring Harry and Meghan in a "light-hearted" reference, but without their consent.

Apparently this resulted in correspondence from  representatives of the Sussex's asking Hagan Homes to remove the ads and citing the provisions of the CAP Code for non-broadcast advertising. Rule 6.2 states "Members of the royal family should not normally be shown or mentioned in a marketing communication without their prior permission but an incidental reference unconnected with the advertised product, or a reference to material such as a book, article or film about a member of the royal family, may be acceptable."

Hagan Homes have duly removed the ads and offered to make a donation of £10,000 to a charity of the Sussex's choice.

But perhaps the time has come to re-consider the role and purpose of Rule 6.2 in the CAP Code. Another royal has also been in the news for appearing in an advertising campaign, but in his case with both consent and, presumably, a fee. In this instance, it was the Queen's eldest grandson, Peter Phillips, flogging milk from Jersey cows on Chinese television. And if you are ever in need of a laugh, try to find the commercials on American television featuring Sarah Ferguson, Duchess of York, promoting Charles Schwab financial services. Or the ones for a brand of fruit juice. Or Weight Watchers.

As things stand, the BCAP Code prohibits unauthorised references to any living person on television, whether prince or pauper, Royal or subject, so no special protection is needed for members of the Royal Family. Outside the United Kingdom, references to the Royal Family are presumably governed either by local laws and regulations, or increasingly, by whatever deal their representatives can negotiate. So we are left with a situation where advertisers in the UK are uniquely constrained by a rule that prevents unauthorised references to the Royal family without their permission in non-broadcast media.

The fact that this rule has been used against an advertiser at time when Harry is conspicuously saying that he no longer wants to be an active member of the Royal Family is particularly troubling. It smacks of trying to have his cake and eat it, rather like that other famous cake eating royal, Marie Antoinette. And it didn't end well for her, either.

There was a time, probably around the birth of the ASA in 1962, when the Royal Family did not get involved in advertising anywhere, so the rule made some sense. There was also a need to protect consumers from misleading suggestions of an implied endorsement by the Queen or other members of the Royal Family.

But this rule comes at a price. Hagan Homes' right of free commercial speech has been curtailed by the application of Rule 6.2 because there is no other basis on which this ad could be banned. There is no false endorsement which could give rise to a claim in passing off and no use of any trademarks, including any that are currently in the course of registration. There is also no implication of any general misleadingness, because the average consumer who is reasonably well informed, observant and circumspect is not going to infer from this ad that Harry and Meghan are moving to a house in Northern Ireland build by Hagan Homes. Or indeed any house in Northern Ireland.

The rule therefore gives the Royal Family a special degree of protection that is granted to nobody else, but which reflects a special limitation on the free speech of the rest of us. Even if that was justified fifty years ago, it no longer makes any sense. It was foolish for Harry and Meghan to reference the Rule at a time when they seeking to divest themselves from the responsibility of royalty, because that must entail a concomitant divestiture of the privileges of royalty as well.

So in the spirit of modernity that the Royal family appears to be embracing, let's scrap Rule 6.2 and simply rely on the usual principles of false endorsement, trade mark infringement and misleadingness - just like we do for any other celebrity.

"We have been in contact with representatives for the Duke and Duchess of Sussex and taken action to remove the social media posts and billboard advertising," 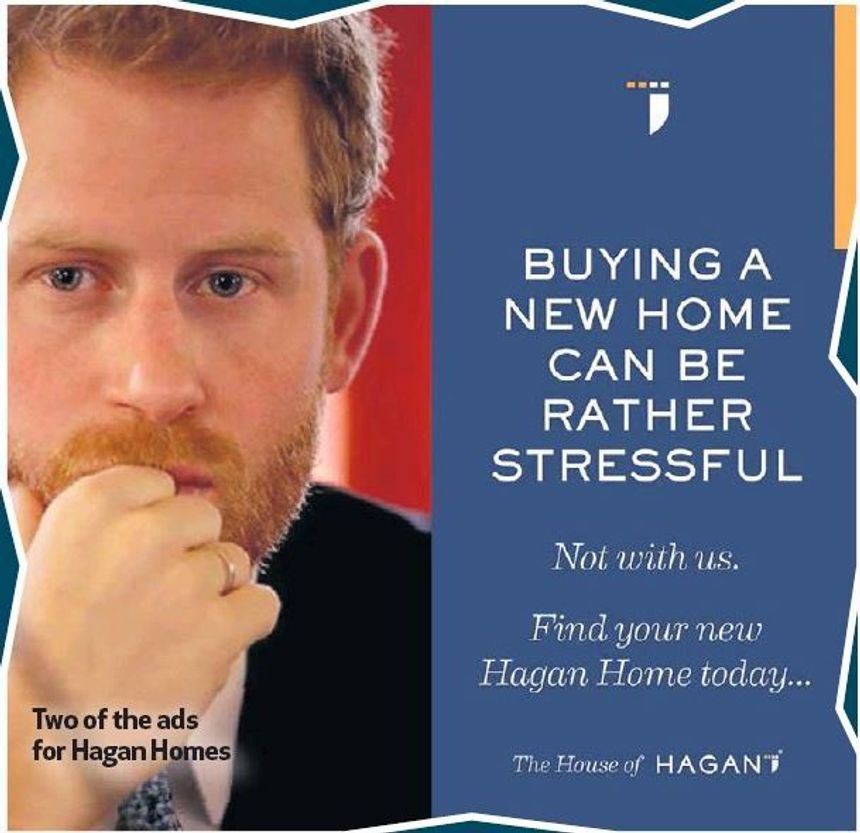