The papers are full of speculation that Boris Johnson is due to announce sweeping new restrictions on the advertising and marketing of HFSS and so-called 'junk' food. This is apparently a result of the dawning realisation that obesity is linked to a heightened risk of mortality from Covid-19. This follows the PM's own heroic, nay Churchillian, defeat of the Nazi - sorry, nasty - virus earlier this year and subsequent acceptance that he needs to shed a few pounds.

One of the most widely reported measures is a Pre-9p.m. ban on advertising HFSS foods on TV. This 'watershed' reference has created the impression that the new measures are designed to protect children, and as the IPA has pointed out, given the scheduling restrictions that already exist on TV advertising of HFSS food to kids, a move to a 9 p.m. ban will make little difference.

However, as we know, kids aren't nearly as badly affected as adults by Covid-19, so the new measures appear to be designed to help fight obesity in adults, as well as children. A noble cause, obviously. But in that case, what's the point of a 9 p.m. watershed? Does the policy assume that adults all go to bed at 9 p.m.? Perhaps they do, but only if they want to get an early night before the long drive to Barnard Castle the next day. Otherwise, not so much.

As commentators have pointed out, there has been a long history of crack downs on 'junk' and 'fast-food' advertising since the Conservative Party won its majority in 2015. First, David Cameron was going to introduce "wide-ranging curbs" in 2016. And then he abruptly left office having lost the EU referendum. Theresa May put the measures on the back burner while she focussed on you-know-what. However, in 2018, in need of a distraction, she was all set to have another go and put plans out to consultation.  Then the curse of Brexit felled her too. So in came Boris, declaring himself a libertarian on these issues, and they were relegated to the back burner once again.

Now, however, as life imitates art, the government has taken a leaf from the playbook of "The Thick of It". As Geraint has reminded me, when brainstorming policy ideas in one scene, a 'Special Adviser' remarks, "What we need is something that the public want, is incredibly popular and is free." Yes! An ad ban! Perfect!!

Of course, "free" is important, given that the £350 million weekly saving that Boris promised would be ploughed into NHS after we left the EU may now need to be used to plug the black hole in the public finances as a result of Covid-19.

The proposed ban does not appear to be evidence-based, merely a reaction by the Prime Minister to his own personal experiences.   The trouble is that we’ve had ad bans and scheduling restrictions on junk food advertising to kids for years, but their impact has been limited and the obesity problem continues unabated. The 9pm ban and other limits on food advertising and marketing have a dangerous displacement effect: they allow the government to pretend it is taking decisive action to combat obesity. In fact, it just more of the same. It is cheap for the government to implement, as it requires no public spending, unlike providing school playing fields, after school activities for children, domestic science lessons, or any number of other policies that would be a more useful addition to the existing advertising restrictions.

Tam Fry, chairman of the National Obesity Forum, is reported as saying "There hasn't been a ban like this but it has got to be given a try - and if after a period of time it is shown not to be so effective, then maybe it will stop." The trouble is there are costs to these bans and restrictions; costs which will be bourn by struggling broadcasters and advertisers. Costs, but no benefits, as the restrictions will probably have no meaningful impact on obesity and only serve as a cheap, quick and easy policy fig leaf for the government.

One look at Boris from before his brush with Covid-19 and it is clear that he was a man who liked a pie. And from the picture below, his favourite pie was apparently the Porky Pie. Eating them, not telling them, obviously.

"There hasn't been a ban like this but it has got to be given a try - and if after a period of time it is shown not to be so effective, then maybe it will stop." Tam Fry, chairman of the National Obesity Forum 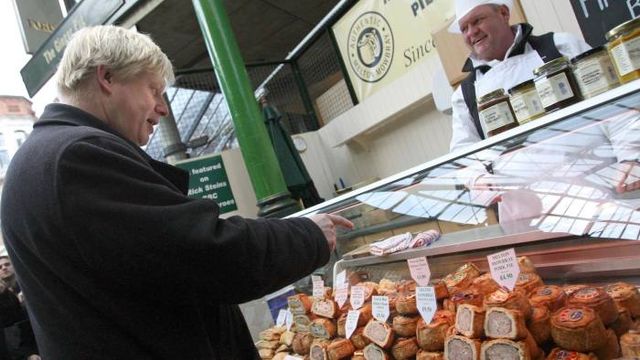 Buy Now Pay Later: FCA regulation looms... what would this mean for those offering this form of payment option?
James Gill
repost  cancel