The UK government is consulting on a complete ban on the online advertising of food high in fat, sugar and salt (HFSS). In particular, the government is asking about what types of advertising should be restricted; who should be liable for compliance; and about enforcement of any new restrictions.

The issue of HFSS food advertising has been rumbling around for a while, with CAP Code restrictions introduced in July 2017. In 2019, the government consulted on restricting advertising of HFSS for TV and online, including watershed restrictions. In July 2020 I wrote that the government had confirmed its intention to introduce a 9pm watershed on TV as part of its obesity strategy. It now wishes to go further and ban the online advertising of “junk” food altogether. The new consultation is purely about this issue and ends on 22 December 2020.

The government says that there is evidence (although it admits that it is not conclusive) advertising can shape children's food choices, both short and long term, and also influence adult purchases and consumption. Therefore, it thinks that further restrictions on HFSS advertising could help reduce overconsumption and generate significant additional health benefits. It also wonders if manufacturers and suppliers might decide to reformulate their products to make them healthier, which would enable them to continue advertising the product, as has happened with sugary drinks.

The government says that children's consumption of online media, and therefore HFSS advertising online, is increasing. It also says while online targeting may be directionally accurate, it is of limited specific reliability, even with human involvement. Consequently, it is “likely that children are seeing HFSS adverts where this is not the intent of the regulatory system”. It does not think that a system based on restricting audience works (e.g. the ASA’s 25% audience threshold rule).

In 2019, respondents raised concerns that an online watershed would not be effective, highlighting that TV is a linear medium that pushes content and advertising to a mass audience, in a manner traditionally dictated by time of day. Online, however, is an on-demand medium commonly targeted to individual users, where time of day is neither a determining factor in what content is consumed, nor a proxy for establishing who is likely to consume it.

The government therefore proposes that new restrictions apply to all online marketing communications including ads in paid-for space, texts and emails, websites, apps, and in-game advertising among others, that are either intended or likely to come to the attention of UK consumers and which have the effect of promoting identifiable HFSS products. This would exclude B2B communications, online contracts and factual claims about products and services (such as nutritional claims or provenance of products). In terms of the latter, the government recognises the regulatory challenges arising from having to make a distinction between factual claims and promotional claims, and the inherently shareable and engaging nature of social media content and alludes to similar issues arising in the context of e-cigarettes.

The government proposes applying a watershed to the adverts shown instream during programming on VOD platforms to mirror its approach to linear TV, separate to the approach for other online media

Interestingly, the government plans to appoint a statutory regulator (Ofcom? or a new body?) with overall responsibility for the regulation of the restriction, with discretionary powers to take effective action against advertisers who breach the rules, especially in cases of more serious or repeat breaches. However, it says that the day-to-day responsibility for applying the rules, considering complaints, provisioning guidance and training material to industry would remain with the ASA. Advertisers would be liable for compliance with a total online HFSS advertising restriction, but the government also wants to consider whether other organisations in the online advertising ecosystem should have responsibility for advertising that breaches an online restriction - this would depend on their level of control. The government will also consider a takedown requirement. The government would maintain the ASA’s current sanctions with a statutory backstop for repeat or serious offenders with the statutory regulator having the ability to issue civil fines.

An obvious question is about how this could be enforced in relation to overseas advertisers, especially in light of the impending end of the Brexit transition period and the end of the UK’s involvement in pan-European enforcement mechanisms. There are also other issues which have been raised in previous consultations, which the government says it does not want to hear about again as it will consider the consultations together. A key issue is the fact that HFSS foods are based on nutrient-profiling, which means olive oil can be classed as HFSS, although it’s probably not the sort of product the government is worried about children seeing adverts about.

As I pointed out in my article in July, there is no such thing as junk food, only a junk diet, and it seems like the government is going about this the wrong way.  Children eat chocolate because it tastes good, not because it is advertised, and I suspect that they would not eat Brussels sprouts if they were advertised instead. It also seems like an easy target for the government - blame the food advertising industry rather than investing in cycle lanes to encourage us to be more active.

On of the telling elements of the press release about the consultation is the claim that "Further advertising restrictions are widely supported by the public, with polling from 2019 showing that 72% of public support a 9pm watershed on junk food adverts during popular family TV shows and that 70% support a 9pm watershed online." So here we have the policy driver: conduct an opinion poll of uncertain provenance, take the headline finding of the opinions of an uninformed cross section of the public, and then define your policy. If this the policy that is wanted by 70% of the public, it must be right.

"My policy on cake is pro having it and pro eating it." Boris Johnson, before he changed his mind about the benefits of eating cake. 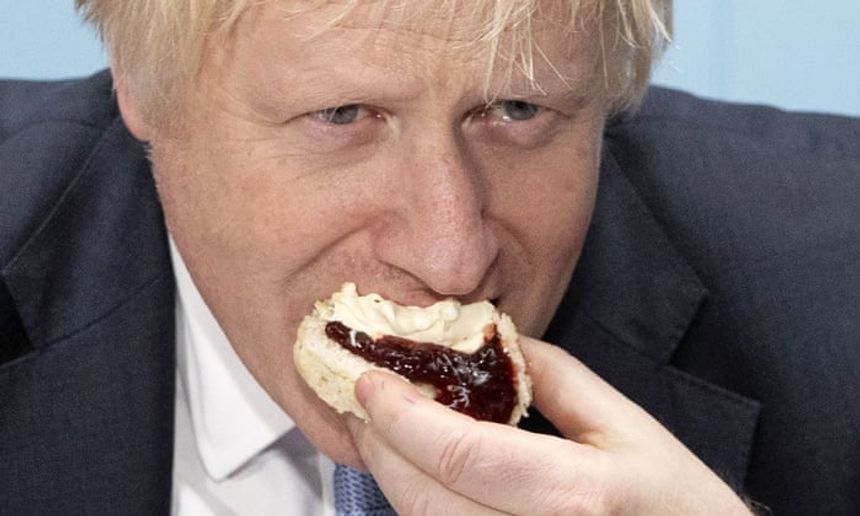