Much has been made of the political fallout around disgraced former Health Secretary Matt Hancock, who was caught in flagrante delicto last week.

Mr Hancock, who is married, was caught kissing a (very close) friend and aide in the office, breaching the very social distancing rules he helped introduce and was keen to see the police enforce against others. The lurid images of Mr Hancock and his aide (who is also married to someone else) were splashed all over the the press over the weekend.

Mr Hancock's hypocrisy was magnified further when we were reminded of his recent statements including: "those of us who make these rules have got to stick by them", "[the rules are] there for everyone" and that the rules were "deadly serious".

The Prime Minister had refused to sack Mr Hancock when the story broke, with his spokesman saying the PM considered the matter 'closed' after receiving an 'apology' from Mr Hancock on Friday.

However, within hours, Mr Hancock resigned. It was clear his position had become untenable. In his resignation letter to the Prime Minister, the Rt Hon Mr Hancock said "We owe it to people who have sacrificed so much in this pandemic to be honest when we have let them down as I have do by breaching the guidance".

We had a new Health Secretary in place by Sunday.

It would have made a wonderful episode of The Thick Of It, but we must also remember that there are innocent casualties in these kinds of situations, in particular spouses and children.

An Affair to Remember or Close Encounters of the Cringe-worthy Kind?

All this brings me to the purpose of this article, which is to highlight one particularly enterprising company that decided to make hay from Hancock's half hour of shame.

The website 'Illicit Encounters', which claims to be the UK's leading dating site for married people (helping them conduct illicit affairs), decided to put a picture of a smug-looking Mr Hancock on its billboard.

For good measure, it added a red bra hanging from a doorknob and included the line "For an affair behind closed doors". Mr Hancock had been filmed kissing Gina Coladangelo up against a closed door in his office.

So, what can he do about it?

His embarrassment now writ large upon the wall, Mr Hancock might be considering his options.

The ad is arguably unseemly, and highly insensitive to the families involved, but it is unlikely to rise to the level of causing 'serious or widespread offence' under the CAP Codes.

What does the CAP Code have to say about the use of his image without his permission? For non-broadcast ads, such as billboards, the following rules of the CAP Code apply:

Prior permission might not be needed if the marketing communication contains nothing that is inconsistent with the position or views of the featured person."

So, it might be considered an 'unfair portrayal' (unlikely) or 'adverse' (probably) to use his image in this way given that he hasn't given permission, but it would be a particularly 'courageous' decision for him to complain to the ASA; partly because any investigation is likely to take six weeks or more (meanwhile the billboard can stay in place), partly because he might lose, and partly because (win-or-lose) he will just bring more attention to this campaign.

A complaint to the ASA therefore doesn't look like a good idea.

What about a claim through the courts?

Similarly, his chances of succeeding in a claim for defamation are low.

So, it seems that Illicit Encounters has given Mr Hancock even more reason to be red-faced, and there isn't much he can do about it. 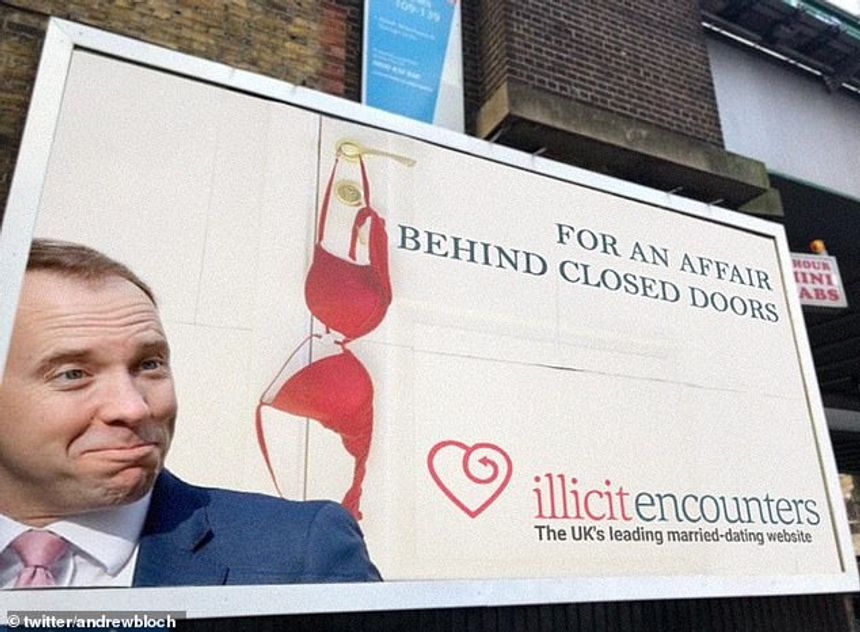