Fortunately, it is quite unusual for the Advertising Standards Authority to uphold complaints about ads on the grounds that they are racist, but this Facebook ad by JD Recruitment has achieved the dubious distinction of being found to be both racist and sexist at the same time. As far as we can recall, that is a first.

The ad used an image of a woman covered in black paint, with bright red lipstick, an open leather jacket with nothing underneath, covering her breasts with her left hand. At least we think it is, but the artwork is not exactly a triumph, so its hard to say.

The advertiser claimed that the image was used "to provide a striking visual image along with the subject matter of the post – a job opportunity in the Blackburn area."  The name of the town has 'black' in it you see. And the woman is all in black. Even less persuasive was their observation that "on reflection, they could see how the image might have caused offence, and objectified the woman depicted, and that they would ensure they were more aware of the issues raised in future marketing communications." At the time of writing, the image is still on their Facebook page, so they might also like to think about their historic marketing, as well as their future marketing.

The ASA concluded that the imagery was likely to cause serious offence on the grounds of race, because it was reminiscent of “blackface” makeup. This has historic connotations with mocking portrayals of black people and is a negative racial stereotype, widely considered to be racist. Does it really take an ASA decision for the world to learn that "blackface" is not acceptable in advertising? Apparently so.

JD Recruitment must have known about the ASA's decision for at least 10 days, and the requirement not to use the ad again started from then, not from the publication of the adjudication today. And yet the ad is still on their Facebook page, which is how we obtained a copy. (And as ever, apologies for any offence caused by showing it here.) So when they say that on reflection, they can see how the image might have caused offence, it seems peculiar that, on reflection, they haven't removed the post.

"[JD Recruitment] said that, on reflection, they could see how the image might have caused offence, and objectified the woman depicted, and that they would ensure they were more aware of the issues raised in future marketing communications." 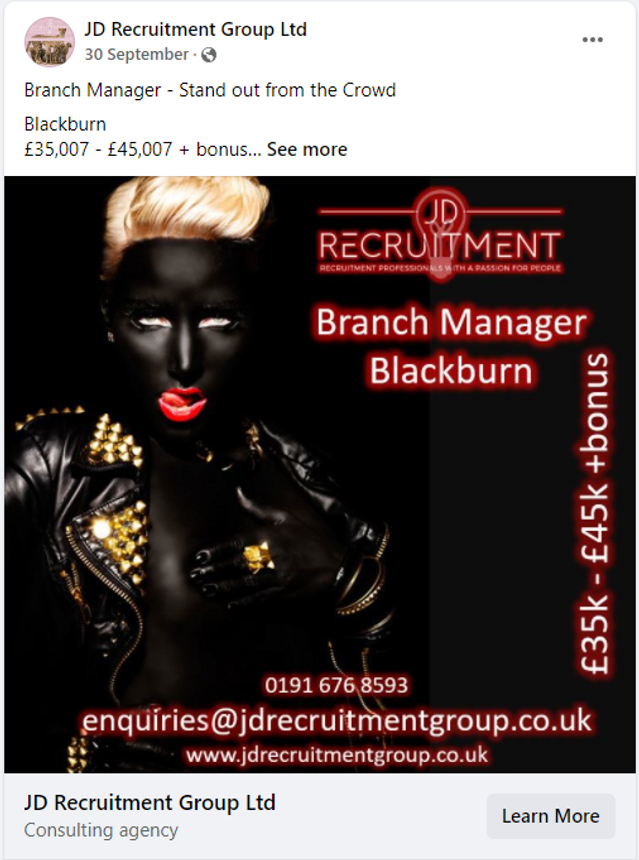