Sadly, the Advertising Standards Authority (ASA) upheld an eye-opening ruling this week following its investigation into a prison job ad by the Ministry of Justice (MoJ).

The ad was a paid-for Facebook ad from the MoJ’s "Prison Jobs" page. It shows a police officer talking to a black inmate with an afro comb in his hair. The picture is accompanied by a headline which states "Become a prison officer. One career, many roles" and body copy which continues, "We're key workers, problem solvers, life changers. Join us to perform a vital role at HMP Wormwood Scrubs". The appeared in Facebook in May, June and August 2022.

A member of the public complained that the ad reinforced negative ethnic stereotypes and was likely to cause serious offence.

The MoJ said that the ad was part of a prison officer recruitment campaign which ran every week of the year, across a range of media platforms. They said that "in reflection of wider society", the statistics around number of prisons, prisoners and prison officers comprised of many ethnicities. This meant there would be "multiple instances of prisoners and officers of different ethnicity interacting". The MoJ’s view was that the general public would understand that there are prisoners and officers of multiple ethnicities, which was reflected in representation of prisons in media such as news or TV programmes.

The MoJ  added that the photographs used in the campaign featured real prisoners and officers, and thus, did not "portray" a black man as a criminal. It showed a real convict, which was not an inaccurate or unfair representation of engagement in prisons. Instead, the MoJ believed that there is "value" in showing a cross-ethnicity engagement as it was a crucial part of the role.

The MOJ outlined that attracting diverse recruits was a key objective of the campaign and that the image  only formed one small part it. None of the other images used in the Facebook campaign showed white officers alongside ethnic minority prisoners.

Despite a well-reasoned argument from the MoJ, the ASA upheld the ruling and found the ad to be harmful and offensive, in breach of Rule 4.1 of the CAP Code. The ad was likely to cause serious offence on the grounds of race by reinforcing negative stereotypes about black men.

The ASA reminded the MoJ that ads sshould not "contain anything that was likely to cause serious or widespread offence, with a particular care to... protected characteristics, including race". This means that depictions of race  can easily give rise to serious offence.

Although the ASA acknowledged that the ad formed part of a wider campaign which used images of prisoners and officers from a number of different ethnic backgrounds, the ASA was only assessing the the post itself, in the context that it appeared on users' Facebook timeline, not the whole campaign.

The reasons why the ASA considered this ad to be harmful and offensive are because 1) there is a negative stereotype based on the association between black men and criminal activity; and 2) Facebook users who saw the ad did not see other campaign images in order to rebut that association. The image of the inmate with an afro comb in his hair is uniquely associated with black culture. The ad also referred to prison officers as "problem solvers" and "life changers", which the ASA considered linked these attributes to the officer, rather than the inmate. Importantly, the ASA acknowledged that the ad did not suggest that all black men were criminals; rather, it showed an imbalanced power dynamic.

Brands should review campaigns in their entirety, not just individual posts, and check the impression created by each one on its own. The Facebook ad was offensive because taken one its own, the image reinforced a negative stereotype. This may have been different if there had been several officers of different races with several ethnically different prisoners.

But the key take-home here is the failure of the MoJ. Whilst the fault here is very niche, and the ruling is not a massive indication of institutional racism, government departments should be held to a higher standard and lead by example through the messages they make in their communications. The MoJ is responsible for maintaining fairness amongst communities, so this adjudication is an unfortunate setback in the efforts being made towards establishing trust and improving relations between authorities and communities.

We considered the ad did not suggest that all black men were criminals, or were more likely to be so than any other ethnic group. However, it showed an imbalanced power dynamic, with a smiling white prison officer, described as a “life changer”, and a black, institutionalised prisoner. 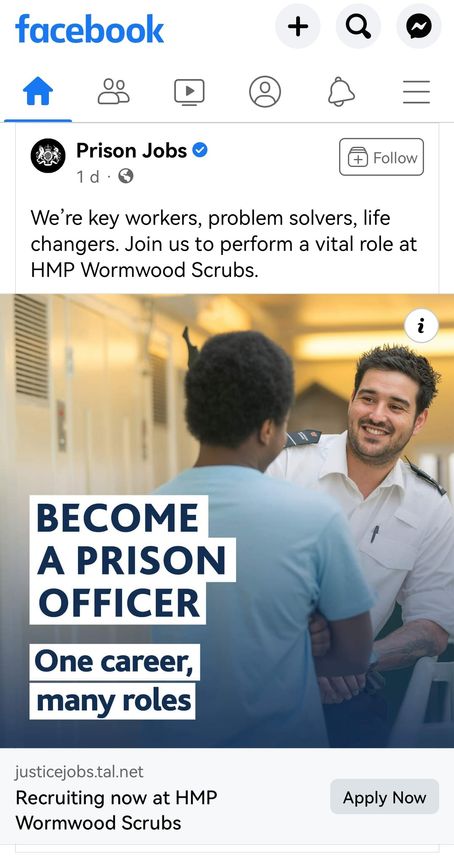