Go Vegan World (“GVW”) made headlines in 2017 when the ASA ruled that its ‘Humane milk is a myth’ ad was not misleading. A year on, the organisation is celebrating another victory as the ASA ruled today that it would not uphold a complaint regarding another of its ads.

The ad featured the headline claim “THEY TRUST US. WE TORTURE THEM FOR RESEARCH”, above an image of a mouse touching a human hand. This prompted a complaint from a medical research scientist who argued that the claim “we torture them for research” was misleading and challenged whether it could be substantiated.

GVW claimed that the ad was intended to remind the public that animals used in research had the capacity to experience pain. They backed this up by providing a declaration signed by a group of neuroscientists and a paper which concluded that animals could generate consciousness. They also cited Home Office statistics which showed that 81% of animal experiments conducted in the UK involved inflicting pain greater than that caused by the insertion of a hypodermic needle.

In its ruling, the ASA agreed with GVW and held that the ad was unlikely to materially mislead readers. The ASA ruled that the Home Office statistics provided by GVW did sufficiently demonstrate that some animals experienced a degree of pain and suffering through research experiments. It added that readers would appreciate that the ad represented GVW’s own view on the issue, and would appreciate that use of the word “torture” was GVW’s own emotive representation of the pain inflicted on animals. Accordingly, the use of the claim in the ad was justified.

This ruling is a clear win for GVW, which is known for its attention-grabbing and often emotive campaigns. With a second ‘not upheld’ ruling under its belt, GVW may now decide to push the boundaries further with even more provocative ads. The ruling and its implications are therefore unlikely to prove popular with research scientists and, as veganism continues to increase in popularity, we expect this will not be the last time scientists and campaigners come head-to-head.

Go Vegan World’s submission to the ASA featured several allegations, including a claim that every minute of every day, 7 animals are used for research in the UK. They also gave the ASA information on these practices, stating that 3.94 million procedures were carried out on animals in the UK in 2016. 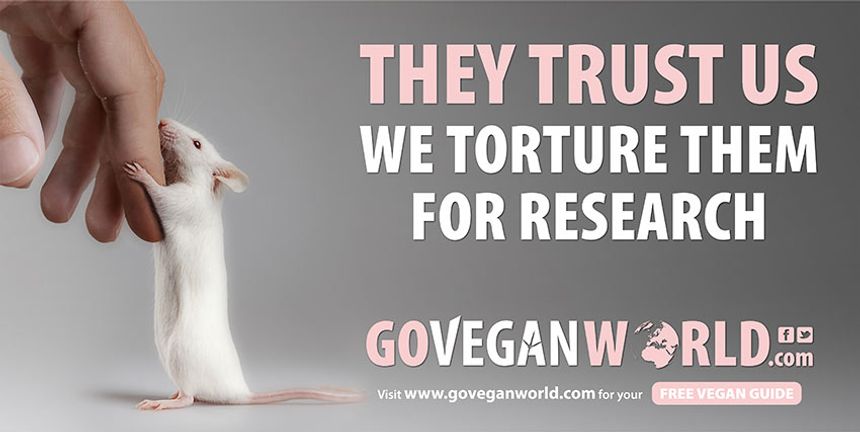