Ten Facebook posts made by the Scottish Gin Society (“SGS”) between December 2017 and January 2018 have left them on the wrong side of the “lime” following the ASA's ruling today.

(Though you might argue the double-serving of the word 'direct' somehow dilutes the strength of the ASA's argument).

Nevertheless, the complaints were upheld for a mixer of reasons, including:

- they were irresponsible because they encouraged excessive drinking;

- the posts suggested that gin had therapeutic qualities and could help to treat health conditions in breach of the Code; and

- the posts had the effect of suggesting alcohol could enhance attractiveness and therefore lead to sexual success.

Of these, three posts were banned because they encouraged excessive drinking, with one containing an image of a glass of gin and tonic with the text “Shut up liver, you’re fine! Gin?”. The image contained the SGS logo and was captioned “Come on, be honest, How many of you are thinking this right now”.

Another, which understandably made the ASA break out in a cold sweat, included an image of gin and tonic accompanied by the text “Healthy eating and exercise make you look better naked. So does gin. Your choice”,

If there are any lessons to be learned it is that a “light-hearted” and “humorous” tone can still stick in the back of the ASA's throat.

A more measured approach is just the tonic.  But if you still think it's worth a shot, perhaps take some advice first.

I hope these awful puns aren't met with a chorus of booze.

'Humour Bypass Award' The gin society had argued its Facebook posts did not fall within the remit of the ASA as they did not sell or promote any products or receive income from the sale of third-party products. But the authority said it considered the posts were subject to advertising rules, because they were "directly connected to the promotion of the Scottish Gin Society's membership service and the intention to sell gin, which was therefore directly connected to the supply of Scottish gin". A spokesman for SGS said: "The ASA freely admits in its judgement that these posts were light-hearted and humorous and they aren't even adverts - nor did we write them. "They were re-posts of funny memes to members by a not-for-profit organisation so shouldn't fall under the ASA's remit. "We completely support responsible drinking, but if this is justice then I am a Long Island iced tea." SGS, which is sponsoring the Scottish Gin Awards in Glasgow later this month, said it would be nominating the ASA for the "Humour Bypass Award". 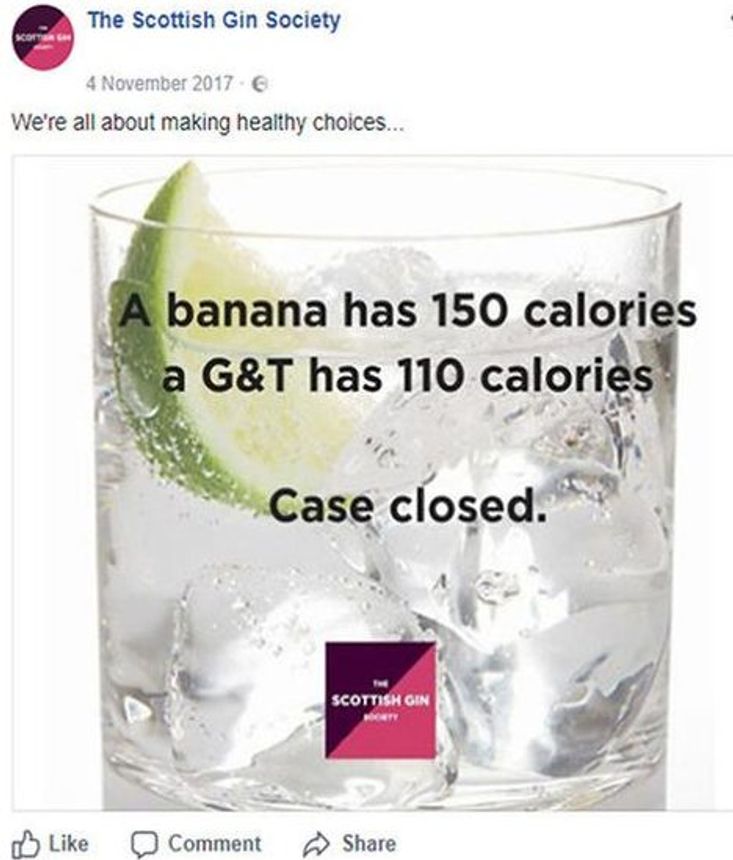 "A #Gin appreciation society has been left with a sour taste in its mouth after falling foul of #Advertising regulators."

"The most po-faced, fun-free, nanny-state judgement imaginable... If this is justice, I'm a Long Island iced tea."https://t.co/ZgLX6F5zfR
Scot Gin Soc falls foul of advertising rules. Says it was merely repeating memes, so rules shouldn't apply.
See what you think: