Sadiq Khan has confirmed that from 25 February 2019, the advertising of foods that are high in fat, salt or sugar (HFSS) will be banned throughout the entirety of the Transport for London's (TfL) advertising estate, which is one of the most valuable out-of-home advertising estates in the world, covering the London Underground, Overground, buses and bus shelters, as well as adverts on roundabouts, taxis, river buses, trams and even the Victoria Coach Station.

The Mayor also cites some scary statistics regarding the level of child obesity rates, London apparently having one of the highest child obesity rates in Europe, with nearly 40% of children aged 10 and 11 overweight or obese, although critics question whether there is evidence of a causal link between advertising on the TfL estate and overweight kids in London.

It was only last year that the ASA introduced further media restrictions on the advertising of HFSS food and soft drinks to children, specifically a prohibition on HFSS product ads from appearing in media (a) specifically for under-16s; or (b) where under-16s make up a significant proportion (i.e. more than 25%) of the audience. It is also over 10 years since Ofcom applied similar controls in broadcast media. Despite these measures, childhood obesity rates continue to rise, suggesting that the problem may have multiple, complex causes and not simply be down to advertising.

In August this year, the ASA rejected a complaint against McDonalds when they promoted a voucher for a £1.99 Big Mac, McChicken Sandwich or Filet-O-Fish and medium fries on the back of a bus ticket. McDonald's presented the ASA with evidence from the Department of Transport (from 2013) which indicated that nationally, the average bus user was 47 years old, as well as specific evidence about the Number 261 from Uckfield to East Grinstead, being the route used by the complainant. The ASA summarised McDonald's evidence as follows, "During school term-time children under 16 made up, on average, 16% of passengers on the route. Three-quarters of those children used a bus pass and so would not see the ad because they did not purchase a ticket. During term-time the proportion of children under 16 that made up passengers on the route who also saw the ad was 12% of the total number of passengers. During school holidays only 4% of passengers on the route were under 16. McDonald’s added that the ad clearly stated that users must be 16 years or older to redeem the voucher." On the basis of this evidence, the complaint was not upheld.

The existing ASA restrictions were agreed with the industry after lengthy consultation. It is no surprise that stipulating an outright ban of HFSS product ads regardless of audience composition has already attracted criticism from the Advertising Association (AA) who have said it will have "little impact on the wider societal issues that drive obesity". The AA has also pointed out that the effect on TfL's revenues could lead to higher fares. But it might have some positive, if unintended consequences. Perhaps the kids that can no longer afford the bus fare home will have to walk instead!

Junk food advertising will be banned on the entire Transport for London (TfL) network from 25 February under groundbreaking measures to help tackle child obesity, the Mayor of London, Sadiq Khan, confirmed today. 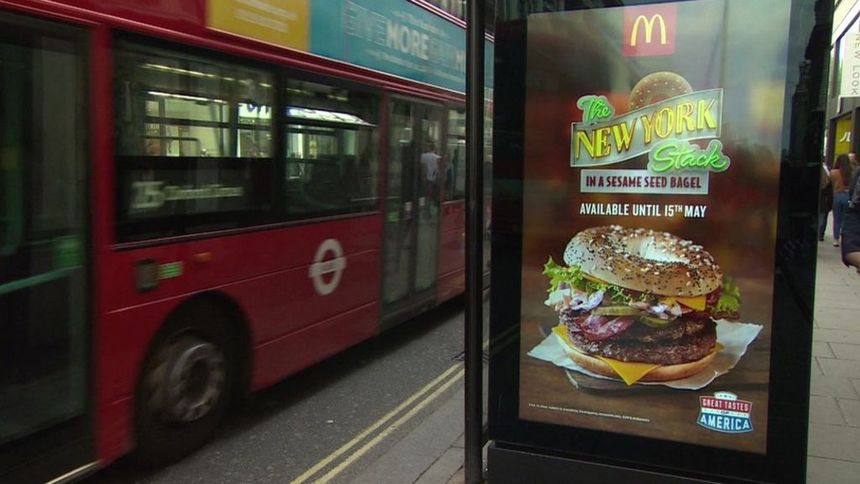