TWO unrelated billboards were censured by the ASA this week for using partial or obscured swear words.  While the ads themselves didn't include actual swear words, the ASA certainly didn't hold back...! Sheesh!

A billboard for BrewDog’s alcohol-free beer, seen in October 2019, included text which stated “SOBER AS A MOTHERFU”. It also featured a can, bearing the phrase “PUNK AF”.

The ASA didn't seem concerned about the use of 'AF', but investigated the phrase “SOBER AS A MOTHERFU”.

The poster campaign ran for two weeks across 44 sites.

Defending the ad, BrewDog said the ad was not designed to cause offence and, given it contained no actual profanity, it would not cause serious or widespread offence and was not inappropriate for display in a medium where it could be seen by children... even though one billboard was reportedly placed near a primary school.

BrewDog said the ad was designed to be eye-catching and considered it promoted being sober.  They did not believe the number of complaints received (26 in total) was indicative of ‘widespread’ offence, despite the fairly localised media and short period during which the ad was used.

They argued that as no profanity or offensive language was used in the ad they could not see how any offence caused could be construed as ‘serious’.

Upholding the complaints, the ASA considered older children and adults who saw the ad would understand “MOTHERFU” was a truncated version of the expletive. They considered the word ‘motherf*cker’ was clearly being alluded to, and “motherfu” would be understood as a clear reference to that swear word.

Despite using it so many times even Samuel L Jackson might raise an eyebrow, the ASA considered the word was so likely to cause 'serious or widespread offence' that such a reference should not appear in media where it was viewable by a general audience. Even in a truncated form, it is not appropriate for display in media where it could be seen by children.

They didn't comment specifically on "Punk AF". It implies ‘Sober AF’ would probably have been ok. ‘Paws’ for thought...

Given that the poster campaign only ran for two weeks across 44 sites, cynics might argue that BrewDog has enjoyed pretty good mileage from the additional publicity which has come from this upheld complaint. Cynics are cynical like that.

BrewDog might also have had a chuckle over the fact that they managed to get the ASA to say 'motherfucker' three times in their statement, which seems a tad gratuitous.... doh, now they've got us doing it.

Apologies if you find what the ASA said (multiple times) offensive... we're just reporting the facts!  Interestingly, most newspapers reporting on the story did censor themselves. But the ASA did not censor the wording, nor did they place a warning at the top of the ruling which they published on their website, despite the untargeted nature of it.

The full ruling can be found here - those of a delicate disposition have been warned.

THE END OF THE F***ING WORLD

In a second, unrelated ruling this week, the ASA investigated a poster promoting the new series of TV show The End of the F***ing World.

The asterisks were used in the original poster.

The poster appeared for just one day outside conference centre ExCel London in February, and was aimed at fans en route to the MCM Comic-Con exhibition where the show was celebrated. Channel Four removed the poster after one day in order to "maintain good relations" with the local council.

It prompted a single complaint to the ASA from someone who challenged whether it was offensive and inappropriate because of the risk of it being seen by children.

The ASA investigated and upheld the complaint, again on the basis that it was obvious what the swearword was, it was used in an untargeted medium, and was likely to cause 'serious or widespread offence'.

Despite the limited audience for the original poster, the fact it referred to the name of the actual TV show, and the fact Channel Four resisted using the actual swear word in the ad, at this point you might not be surprised to learn that the ASA decided to use the uncensored word 'fucking' THREE times in its upheld (untargeted) ruling.

I'm as shocked as you are...!  But presumably not as shocked as the individuals who complained about these ads in the first place, who have done their bit to ensure that as many people as possible get the opportunity to be offended by these posters, and by the ASA's rulings.

The full ruling can be found here

Campaign reports that it is not the first time the 12-letter word has got BrewDog in trouble with the ASA. In 2013, the brewer was told by the body to remove a statement from its website referring to itself as a "post Punk apocalyptic mother fu*ker of a craft brewery" (asterisk included in original text). BrewDog founder James Watt responded to that ruling by saying: "We believe in freedom of speech and artistic expression. We don’t believe in mindless censorship. As for the ASA – those motherf*ckers don’t have any jurisdiction over us anyway." 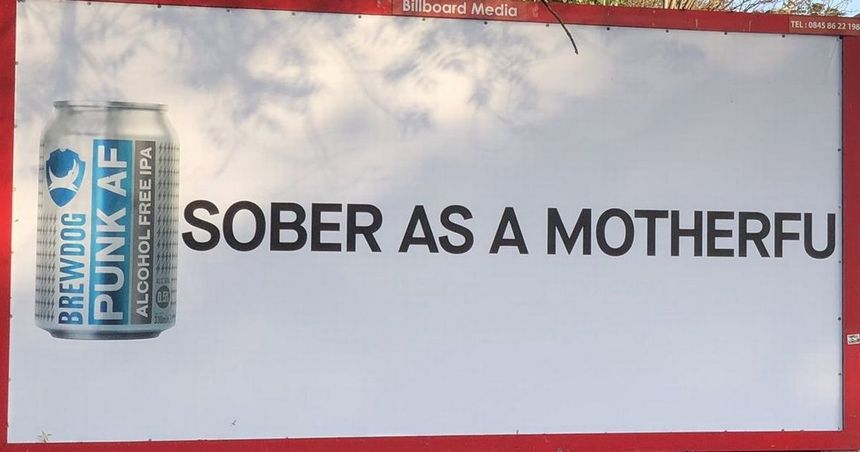 BrewDog rapped for 'sober as a motherfu' non-alcoholic beer ad posted outside schoolhttps://t.co/hmJgPrNK7F

This beer advert has just been banned https://t.co/bhhwutKRxO