I've been a vegetarian since I was about 5 years old. I'd already started to think that eating dead animals was a "yukky" idea before the day we were marched into the dining room of the sprawling, ramshackle Victorian mansion that passed for a school. What sealed a lifelong lifestyle decision that day was being served mince with a ladle from a vast cauldron, which then spread across the plate like a noxious effluent. Even now, if I recall the smell, it makes me retch. I duly announced to my teacher that I did not eat meat, and therefore would not be availing myself of the mince, thank you very much. Although academically excellent, she was a strict and completely terrifying woman. She informed me that, on the contrary, I would indeed be eating the mince. So I did. Then as soon as I'd finished the last mouthful, I duly threw up all over the green formica dining hall table. From that day on, my dietary choices were tolerated, if not respected, and I have remained a vegetarian ever since.  So as a vegetarian and an advertising lawyer, I have a particular interest in the ASA's decision to ban Burger King's advertising for its Rebel Whopper, the 100% Whopper No Beef, plant-based burger.

Growing up in London in the 70's and 80's, I would go to restaurants and find there were no options available for a vegetarian, let alone a vegan. One of the few available choices was the tasty 'Spicy Bean Burger' at Burger King. Did I worry that my Spicy Bean Burger might have been cooked on the same grill as a meaty Whooper? I did not. Given that I was buying my vegetarian treat from a restaurant that had large signs over the door saying 'Burger King', I was perfectly well aware of that possibility. But the choices were limited, and I was not that much of a purist. Was I concerned that the mayonnaise on the salad garnish might contain eggs? No. It was mayonnaise after all, so of course if contained eggs. And besides, I was a vegetarian, a creature of compromise, not one of those radical, extreme, skinny and perpetually hungry vegans.

Fast forward to 2020, and we live in a world (present circumstances excepted), where most restaurants in the UK have at least one vegetarian option. Usually, they're OK and sometimes they're great. Of course, these dishes are all conjured up in kitchens where meat is being prepared as well, but that's a compromise I'm prepared to make in returning for being able to share a meal with my meat-eating friends, including my old school friend who insists on eating steak tartare and veal whenever we dine out (despite being a Hindu!). This is why there are so few dedicated vegetarian restaurants, despite the enormous growth in the popularity of vegetarianism and even veganism since I was a child, to say nothing of pescatarianism and even 'flexitarianism'.

All of which is why the ASA's decision to ban the ads for the Rebel Whopper is so disappointing, and, dare I say it, downright wrong. Apparently 10 people complained about claims that the Rebel Whopper was a "100% Whooper No Beef" and "plant-based" burger. The burger itself is made of soy-based protein, but it is not cooked on a separate grill from the regular burgers. One of the 3 ads even contained a disclaimer stating "Product is cooked alongside meat products", although that might be classified as a statement of the bleedin' obvious, given the name of the restaurant. The clue, quite literally, is in the name.

The ads also included a logo with the words 'The Vegetarian Butcher' but the product itself is served with regular mayonnaise on the garnish, and therefore contains eggs, although Burger King pointed out that customers could always ask for 'a Rebel Burger, Hold the Mayo'.

This ruling illustrates three of the recurring, frustrating problems with ASA adjudications.

First, the 10 vegan warriors who claimed that the ads were misleading were not misled. They correctly identified that the burgers would be cooked alongside meat products, not least because one ad expressly said so. They also correctly identified that the mayonnaise contains eggs, not least because it did not claim to be 'vegan mayonnaise'. So the motivation for the complaints was not that they were misled, but most likely that the complainants disapprove of burger restaurants.

Second, the ASA has failed to judge the ads through the eyes of the 'Average Consumer', who is 'reasonably observant, well-informed and circumspect'. If, like me, you are a 'lacto-ovo vegetarian' who eats cheese and eggs but not meat, then you're going to be OK with eating a meat-free burger served in a restaurant called 'Burger King'. There's that clue again. But if you are a really strict vegan of the kind who drinks Oat Milk and avoids cheese and eggs, then you're not. But you'd have to be a vegetarian of substantially sub-par levels of circumspection to expect a completely vegan meal, totally free from cross-contamination with meat products, purchased from a burger restaurant. Frankly, if you're that much of a purist, you'll probably be choosing to go somewhere else anyway.

Third, section 3.1 of the CAP Code says that advertising must not be "materially  misleading". This is yet another decision where the ASA appears to have lost sight of that requirement for materiality. The claims should have been considered as part of the whole ad, and in context. In this instance, the context is an ad for for burger restaurant.  The average consumer, or at least this average consumer (i.e. me) is not so naive as to think that the vegetarian option cooked in any restaurant, let alone a burger bar, comes with some kind of guarantee that it will have been cooked on separate cooker and with separate utensils from all the meat dishes.

Twitter is alive with outraged vegans this morning. But their outrage is as synthetic as the meat used in the Rebel Burger. No reasonable person would be misled by this ad. As a more flexible vegetarian, one who is prepared to cross the threshold of Burger King to buy a veggie burger, I simply want to see advertising being used to encourage more retailers and restaurants to drive product innovation, and introduce more alternatives to meat.

And as soon as this lock down is over, I'm off to Burger King to try a Rebel Burger.

Ten complainants, who understood that the Rebel Whopper was not suitable for vegans, or vegetarians and those with egg allergies because it was cooked alongside meat products and used egg-based mayonnaise, challenged whether the claims “100% Whopper No Beef” and “plant-based burger” in ads (a) and (b) and (c) were misleading. 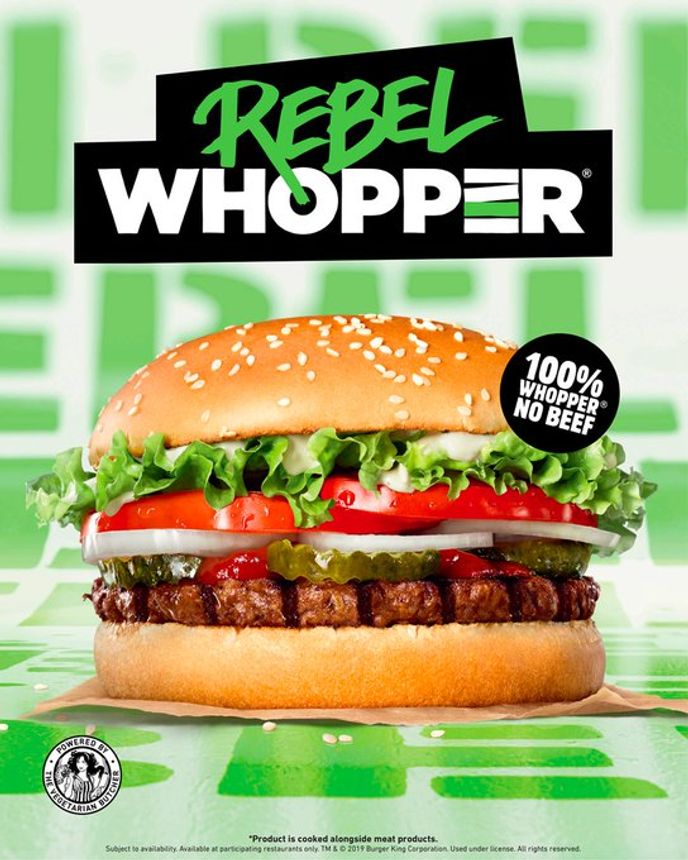