Yes, you read that correctly.  The public is becoming numb to headlines which would have been unthinkable a decade ago, but as the US election campaign ramps up, this is probably just the tip of the iceberg. And it's an iceberg made of... well, it's a metaphorical iceberg, so it's up to you what you think it's made of... I have a few thoughts, which I won't share in case you're eating.

Anyway, back to the point, which is that following some criticism for not acting decisively enough in relation to posts made or shared by Donald Trump in recent weeks, Facebook has acted quickly and decisively in removing posts for the Trump re-election campaign which prominently featured an upside down red triangle.

The ads in question were posted on Facebook pages belonging to President Trump and Vice-President Mike Pence. They were online for about 24 hours and had received hundreds of thousands of views before they were removed.

As many will know, the red triangle was a badge which prisoners of war in Nazi concentration camps were forced to wear, and it was worn inverted for political prisoners.

For the benefit of UK readers: "Antifa" is short for anti-fascists. The BBC article describes 'antifa' as "a loose affiliation of mostly far-left activists that oppose neo-Nazis, fascism, white supremacists and racism." UK readers might be forgiven for thinking that being 'anti-fascist' was a good thing, but Mr Trump and others 'on the right' use this phrase to refer to the extreme, violent fringes of the far left. This is often done in a relatively imprecise way and without treating the extreme, violent far right with the same contempt.

In an example of its use, Mr Trump recently accused "antifa" of starting riots at street protests across the US over the death of African American George Floyd, who died while being arrested by police.

This latest debate follows reports last month that Twitter put a warning on one of the president's tweets about rioting in Minneapolis - saying it had "glorified violence".

We anticipate that the social media giants will increasingly be drawn into debates surrounding the latest US election campaign, and the debates will encompass organic posts as well as sponsored posts and ads.

Within the past few hours, Twitter has placed a large warning label on a tweet by Donald Trump to make clear it includes "manipulated media". This is the first time Twitter has used this label on a post by the US president.

The video he shared shows a black child running away from a white child while playing, with a fake CNN caption. The caption reads: "Terrified toddler runs from racist baby", and the video accuses CNN of "fake news". 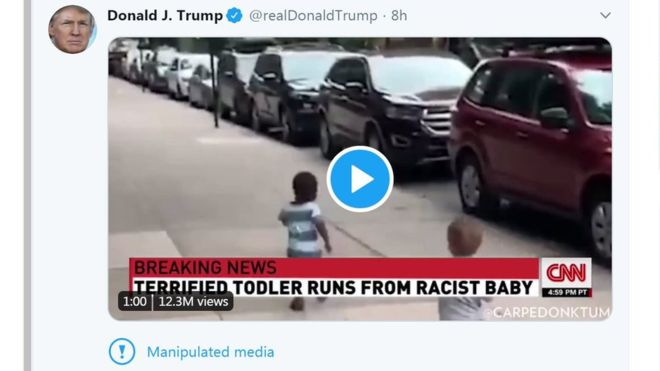 By clicking on the prominent warning, Twitter users are shown a statement which explains that: "The president shared a version of the video which many journalists confirmed was edited and doctored with a fake CNN logo."

It seems the creator of the video was a pro-Trump Twitter user who responded: "Thanks CNN, you gave my video three top 20 (two top five) trending spots. I haven't had this much fun since you freaked out about the Time Magazine cover!"

CNN replied to the US president, via Twitter, to say: "CNN did cover this story - exactly as it happened. Just as we reported your positions on race (and poll numbers)... We'll continue working with facts rather than tweeting fake videos that exploit innocent children. We invite you to do the same. Be better."

Mr Trump hit back [at Twitter last month] by talking about the "unchecked power" of big tech. He said that Section 230 - a law that protects social media companies from being legally responsible for the online content of users - should be revoked. 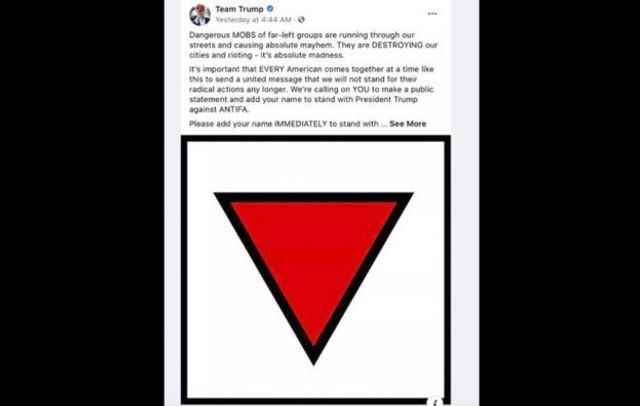