In case you missed it, Laurence Fox has become embroiled in (another) debate about race... or about free speech...  or both.

This time, it wasn't due to a question he was asked on a political panel show or a press interview. Instead, it was sparked when Mr Fox saw a Tweet by Sainsbury's in which the supermarket stated:

"We are proud to celebrate Black History Month together with our Black colleagues, customers and communities and we will not tolerate racism.

We proudly represent and serve our diverse society and anyone who does not want to shop with an inclusive retailer is welcome to shop elsewhere".

The tweet included a link to more information which stated that Sainsbury's had made “safe spaces” (in practice these are online forums) for black workers to talk about the issues thrown up by the Black Lives Matter protests.

Mr Fox felt aggrieved by this, considering it to "promote racial segregation and discrimination".  He said he wouldn't shop in Sainsbury's ever again, and called for a boycott of the supermarket, posting the following Tweet: 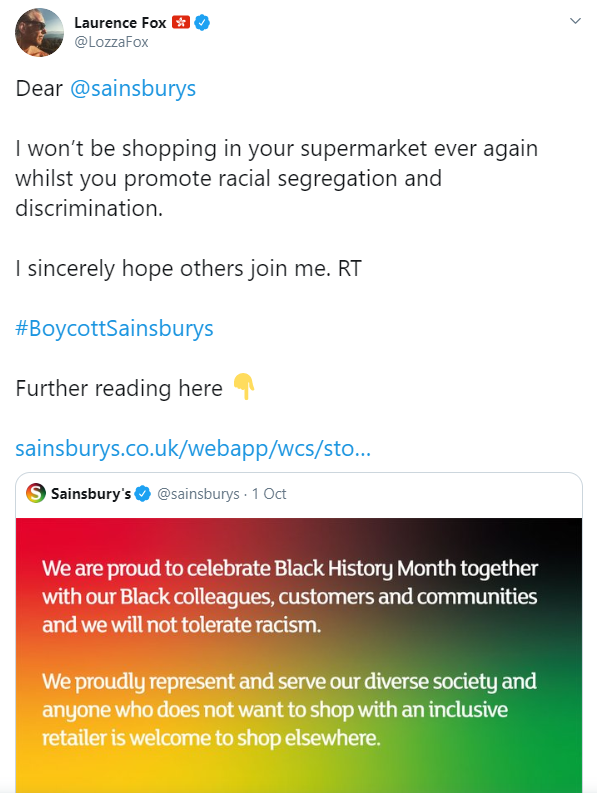 Naturally, and predictably, this elicited a range of responses.

Some responses by well known individuals directly accused Mr Fox of being "racist".

In retaliation, Mr Fox labelled some of his detractors "paedophiles".

The point he seems to have been trying to make is that he is not a racist, and is free to air his personal views about race related issues in public without being labelled a racist. Furthermore, that anyone who accuses him of being racist should not complain when he, in reply, accuses them of being something terrible. To make his point, he didn't use half measures, and plumped for "paedophile".

You won't be surprised to hear that some people really rather object to being called a paedophile, even those who thought they might be justified in calling him racist in response to the views he expressed in his tweet.

One such aggrieved person is Crystal, star of Drag Race UK. Crystal said: "An accusation of paedophilia is one of the oldest homophobic tropes, and it was very shocking to have that levelled at me, not just by Mr Fox, but also his many followers who believed him.  I may have had to endure homophobic bullying as a child, but I will not tolerate it as an adult."

Instead of continuing the name-calling, Crystal is taking legal advice, apparently with a view to taking legal action against Mr Fox, and isn't alone in doing so.

Another person who was called the same thing by Mr Fox is Simon Blake, Chair of Stonewall UK. Mr Blake had drawn Mr Fox's ire by tweeting: "What a mess. What a racist tw**." (asterisks added).

Obviously this was all a hot mess of the sort that happens on social media on a very regular basis. However, it will be interesting if the threats of litigation result in a trial, as the courts will have to unpick these important questions of free speech and defamation.

In broad terms, it is likely the courts will be asked to rule on whether:

a) Mr Fox was defamed when he was called a 'racist' by those who objected to the views he expressed in his 'punchy' tweet, and

b) the others involved were defamed when they were called a 'paedophile' by Mr Fox in his retaliatory tweets, an accusation which he seems to have levelled at them not to seriously accuse them of being paedophiles but rather to make a broad point about free speech and to underline how objectionable it is to call people names. 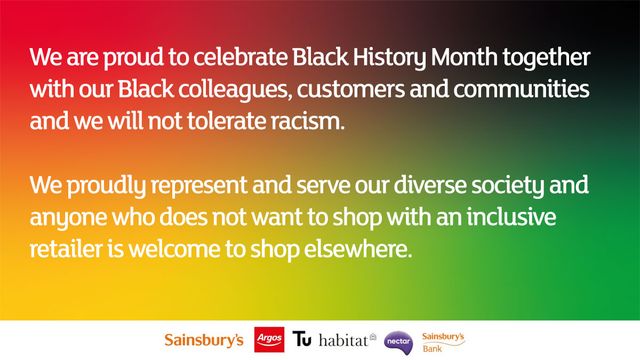 This ad is as real as the backlash from artists.
Geraint Lloyd-Taylor