On 12th October, the Advertising Standards Authority (ASA) published an interesting ruling against the Department for Levelling Up, Housing and Communities (LUHC).

You would be forgiven for thinking this is some sort of creative brand (I was guilty of this). However, the LUHC is indeed a Government department established in 2006 and formerly known as the Ministry for Housing, Communities and Local Government.

On 13th March 2022, the LUHC issued seven newspaper advertorials on websites for some local newspapers such as the Grimsby Telegraph, Derby Telegraph, Birmingham Mail, ConrwallLive, Leicestershire Mercury, Wales Online and the Newcastle Chronicle. Every advertorial had the following headline: “Levelling Up! What is it and what does it mean for [town name]?”. This was followed by the text which stated "By Millie Reeves Commercial Writer". The advertorial also had a grey box which stated "ADVERTORIAL". The Government's logo was present at the bottom of the article. These advertorials could generally be accessed thorugh the newspaper website, or via Facebook or Google ads.

The advertorials were brought to ASA's attention following complaints from two Labour MPs, namely, Alex Norris and Lisa Nandy. They challenged whether the ads were obviously identifiable as marketing communications. 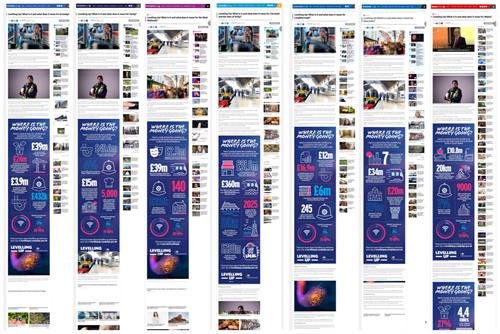 LUHC tried to rebuff this challenge, calling the advertorial labelling "visible and prominent" and pointing to the "ADVERTORIAL" box on the right hand side. 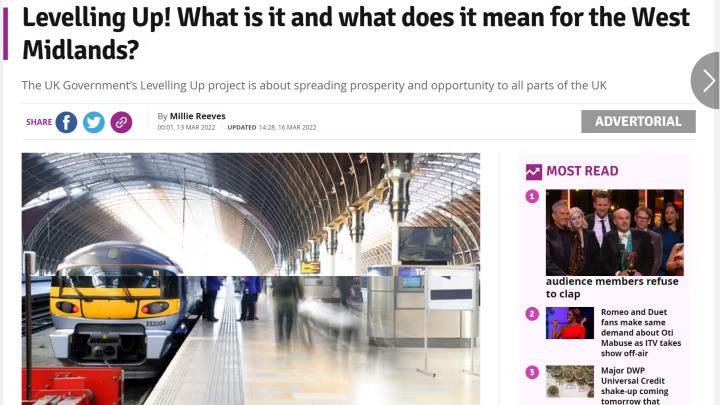 Furthermore, the LUHC placed responsibility for correct labelling at the feet of the publishers, who they thought were best positioned to understand what best resonates with their readers. LUHC also pointed the ASA towards the infographic with the Government logo. This logo, alongside a call to action featuring a gov.uk link and the use of a "Commercial Writer" label was, according to LUHC, sufficient  to make readers aware about the article's commercial nature. 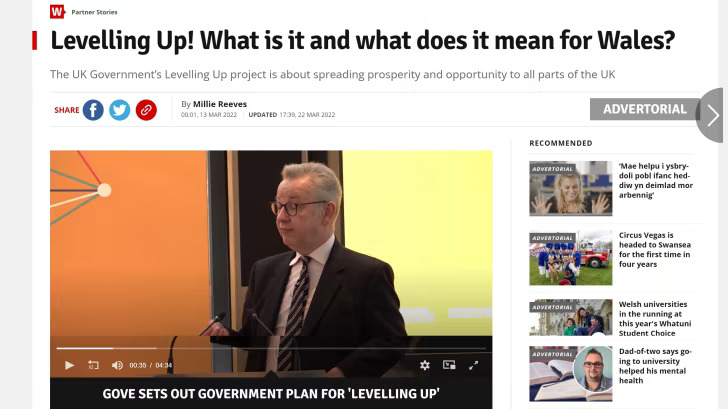 But the ASA disagreed and upheld the ruling. It ruled that it was a breach of CAP Code rules 2.1, 2.3 and 2.4. The ASA considered that it was not clear that the labels were adequately linked to the content. The 'Advertorial' label was not sufficient because its placement in the top right corner meant that readers were likely to overlook this text, or weren't likely to associate it with the article itself. The ASA also didn't like the "Commercial Writer" descriptor, which was placed after the writer's name, underneath the headline. In relation to the infographic with the Government logo, the ASA concluded that readers were likely to understand that to indicate the source of the infographic itself, rather than to indicate the whole article was paid-for content.

The key take-home here is that any advertising communications must be obviously identifiable as such. With advertorials in particular, publishers and marketers must make clear that they are made for advertising purposes. Here, perhaps harshly, the ASA shows us that an "ADVERTORIAL" label on the right hand corner in not always sufficient. Of course, the advertorial has to be taken in its full context and the reference to "By Millie Reeves, Commercial Writer" and use of the Government logo didn't help clarify the nature of the content.

Brands must therefore take care to ensure that their advertising communications are clearly labelled as such. It remains the advertiser's responsibility, and 'courageously' trying to shift the blame onto someone else, like the publisher, might be a tactic employed by politicians all the time, but it won't usually wash with the ASA.

It has to be said that when it comes to labelling various kinds of commercial content, the ASA's mixed messaging, and occasionally quite odd interpretation of the rules, whether in the sphere of influencers or other types of content, doesn't sit comfortably with all advertisers, influencers, media owners, publishers, agencies, lawyers... and perhaps some updated guidance (and even a fresh approach) might well be overdue.