Last Friday, we noted that Campaign Live were reporting that the Advertising Standards Authority had advised that an ad for estate agents Marsh & Parsons featuring Theresa May was in breach of the CAP Code. This was apparently on the basis that Rule 6.1 of the CAP Code says that ads "must not unfairly portray or refer to anyone in an adverse way unless that person has given the marketer permission to allow it." On the other hand, Rule 7.1 states "Claims in marketing communications, whenever published or distributed, whose principal function is to influence voters in a local, regional, national or international election or referendum are exempt from the Code". The implication is that the Marsh & Parsons ad is not exempt from the Code - although there are no reports of any complaints to our knowledge.

But a week is a long time in both politics and advertising regulation, and this week we understand that despite 71 complaints about a magazine published and distributed by Whetherspoons', promoting - amongst other things - the avowedly pro-Brexit views of its founder, Mr Tim Martin, the ASA has told Huff Post that "the magazine 'falls out of its remit' due to the publication’s political content."

This is all very odd because the Electoral Commission has told Huff Post “As there is no election or referendum period in place at this time, the literature that Wetherspoon’s has distributed is not covered by electoral law.”

So what's going on? Have our friends at the ASA been hitting the White Lightening at their local Whetherspoons with a bit too much gusto? Shurely not.

The front cover of the magazine has photos Mrs May, several leading remainers, including Dominic Grieve and Gina Miller, as well as a flash which states 'Circle of Deceit: How the metropolitan elite tried to con the British public about the need for a 'deal' with the EU - and about food price post Brexit'. If the Marsh & Parsons ad broke rule 6.1, it's hard to see how this cover doesn't.

The magazine also makes a readership claim that might not pass any kind of audit. "Read by 2 million customers" assumes that all Wetherspoons' customers can and do read the magazine. Presumably, this was scrutinized by the same team of fearless fact-checkers that verified the "£350m per week for the NHS" claim. 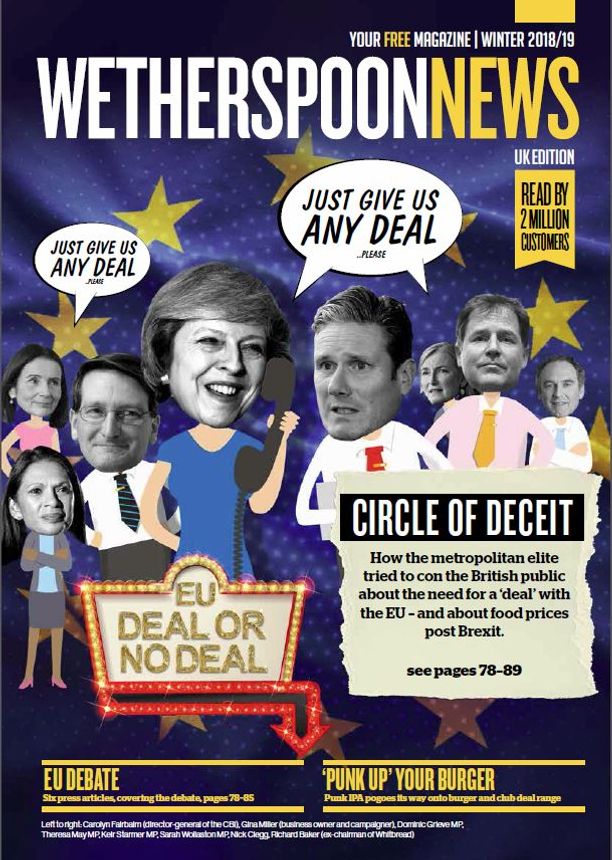