Today's Advertising Standards Authority (ASA) decision about gender stereotyping in a poster on the London Underground for PeoplePerHour, a Search Engine Optimisation (SEO) agency, contains at least 3 interesting lessons: first, about the heightened sensitivities around gender stereotypes; second, about the dangers of making cultural references in ads that the audience my not appreciate; and finally, about the risks of making a precipitous public apology which is then treated as an admission of guilt by the ASA.

Before considering those lessons, the facts of the complaint are these. The poster features an image of a woman with the headline "You do the girl boss thing. We'll do the SEO thing." The body copy then stated "Hire expert freelancers by the hour to help your business grow. With everything from coding to video editing, it's easy to see why over 2 million people have trusted PeoplePerHour to help build their dream business." The 19 people (we make no assumptions about their gender) who complained believed that the ad was patronising and implied that women are not technologically skilled. Fair point: SEO is a cocktail of dark art and black magic, whether you're a male boss, a female boss or a 'prefer not-to-say' boss.

It seems that by using an image of a woman as the boss, the advertiser was trying to be progressive, politically correct or woke, depending on your point of view. But surely showing a woman as the boss rather than a man cannot be gender stereotyping? Unfortunately, PeoplePerHour managed to snatch a patronizing defeat from the jaws of a gender equality victory by using the phrase "girl boss thing". Given that 19 people complained to the ASA about this ad, notwithstanding that it must have been seen by millions of people, gender stereotyping is clearly a contentious and sensitive issue: and that is lesson one.

In fact, "girl boss thing" was apparently intended to be a reference to the term 'Girl Boss' that PeoplePerHour credit to Sophia Amorusu, the founder of Nasty Gal. They describe her as "one of the most successful entrepreneurs of our time", although she's never been on The Apprentice. Readers of this blog may recall Nasty Gal as a brand that has had ASA complaints upheld against it for using unhealthily thin models. PeoplePerHour said that their intention in using the phrase 'Girl Boss' had been "to empower women, not condescend". And herein lies lesson two: if commuters crammed on to Bethnal Green tube station during rush hour on a wet Monday morning in November have never heard of Sophia Amorusu or her 'Girl Boss' phrase, then they're not going to interpret the ad in the positive, empowering way that was intended.

According to the ASA, the poster was seen by the complainants during November 2019, but by 11th November, PeoplePerHour had already published a fulsome and unreserved apology on their website, and undertaken to change the ad by the simple but highly effective expedient of changing the headline from "You do the girl boss thing" to "You do the boss thing." In other words, by removing the word 'girl'. Given that PeoplePerHour had taken action so quickly, probably before they had even received a complaint from the ASA, it does seem rather harsh that they should now have to incur the negative publicity of an upheld complaint. In fact, there would have been some logic in the ASA not bothering to investigate the complaint, or simply resolving it informally, given that the advertiser had already taken remedial action. Unfortunately for them, the ASA is looking for decisions to publish on the new gender stereotyping rule and guidance. But the fact PeoplePerHour had already published a mea culpa, probably before receiving an ASA complaint, gives rise to the third and final lesson: if an advertiser not only takes corrective action but also publishes an apology, then although that might be a great move from a PR perspective, it may also be taken as a written confession from the advertiser by the ASA, with the inevitable result being an upheld complaint.

Still, it could have been worse. Imagine if instead of quoting Sophia Amorusu, PeoplePerHour had responded to the complaints by quoting "one of the most successful film directors of our time", the late, great Michael Winner. "Calm down dear, its only an advert."

A poster ad for PeoplePerHour, seen on the London Underground in November 2019, featured an image of a woman and text that stated "YOU DO THE GIRL BOSS THING. WE'LL DO THE SEO THING". Further text stated "Hire expert freelancers by the hour to help your business grow. With everything from coding to video editing, it's easy to see why over 2 million people have trusted PeoplePerHour to help build their dream business". 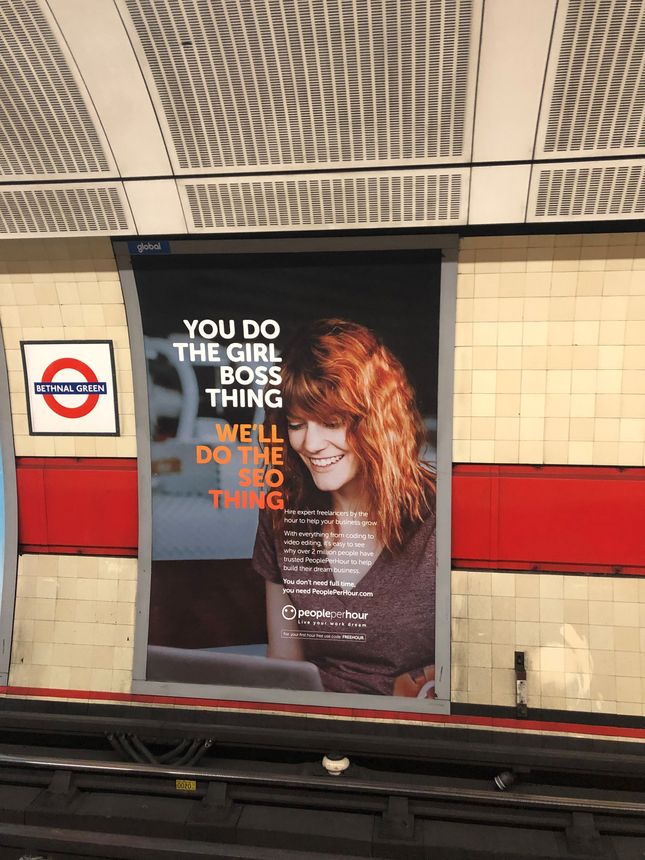