This is the time of year when the ASA issues its perennial guidance about not publishing ads with an Easter theme that will cause serious and widespread offense. If you want to read it, please follow the link below, but to be honest, that's the gist of it.

Disappointingly, however, the ASA has failed to provide any actual, graphic examples of really, really offensive Easter themed ads. Which is a shame, because as we'll be staying at home this coming Easter, we need any diversion we can find.

And so that's where we come in. We've scoured the archives for the most offensive, the most outrageous, the most complaint generating Easter ad of all time. And we think we've found it.

But first, by way of context, let's consider the ads picked out by the ASA in its new guidance for special mention. They give three examples. First, there's an advert for Boylesports that a bleeding hand nailed on to a cross. Yuk. But only 1 complaint. Hardly 'serious and widespread offence'.

Second, there's the ad for Banks' Beer, showing Jesus wearing a rabbit suite. But again, just the one complaint, and that wasn't even upheld. In fact, the whole investigation went down a bit of rabbit hole.

Finally, the ASA mentions an email for a sex-toy which included textual references to "RES-ERECTION", "Easter Treats" and "Sinful Sunday". Disgraceful. But despite being upheld, there was only the one complaint. So all-in-all, a bit limp.

In that context, you really have to take off your Easter bonnet to Paddy Power for their magnificent effort at offensiveness back in 2006. Sadly, there appears to be no record of the investigation on the ASA's website, but we've deployed our finest skills of investigative journalism to uncover not only the facts of the case, but a copy of the actual advert as well!

According to Campaign on 11th January 2006, the poster was withdrawn after Paddy Power were warned it could cause serious or widespread offence. To be fair, that must have been the intention, because a couple of months before, on 5th October 2005, The Irish Times reported that the same ad had been withdrawn in Ireland following over 100 complaints to the ASA Ireland, together with another 100 complaints submitted to Paddy Power itself.

So as we approach Holy Week with this unseasonal lockdown, let us remember the sacred words sung by the late, great Eric Idle, as he himself was nailed to the cross.

"Always look on the bright side of life...."

An unrepentant Paddy Power took down its Last Supper posters around Dublin and replaced them with ones reading: "There's a place for fun and games. Apparently this isn't it." The Irish Times, 5th Ocotober 2005 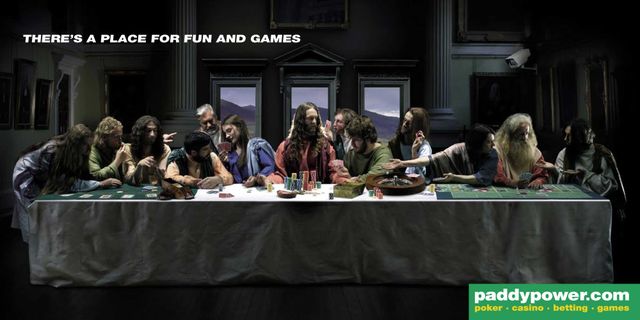 Marketers should take care not to cause serious or widespread offence with their
campaigns around Easter. Read our advice on this here https://t.co/EjEvVGBqER pic.twitter.com/Nxd90snxhQ