The owners of BrewDog worked out long ago that the ASA's sanctions do little more than give it a bit of extra publicity at no extra cost. For most ads, the ASA's main sanctions are to 'name and shame' those who breach the CAP Code and require that an ad is taken down after the conclusion of its investigation.

BrewDog doesn't aim to mislead consumers. It simply uses partly-obscured swearwords in a few locations, which prompts a few complaints, and spurs the ASA into action.

The ASA isn't stupid of course, it realises what is going on, but it has limited options: ignore it and let them get away with these breaches or take action and give them free publicity.

Either way, I can picture the ASA screaming (maybe barking) obscenities into a pillow whenever another complaint comes in about a BrewDog ad.

It's big, but is it clever?

Leaving aside the above tactic, which seems to be working, let's take a closer look at the ad itself.

Do you see what they did there?  So yes, pretty big AND pretty clever.

The asterisked letters were obscured by a can of BrewDog.

The same ad appeared as an out-of-home poster and as a press ad in August 2020:

Several people challenged whether the text “F**k You” was offensive and inappropriate for display in a medium where it could be seen by children.

BrewDog plc argued they had wanted to shock people into thinking about the planet and reducing and removing the amount of carbon in the atmosphere.

I'm not sure how serious that argument was, but on a more serious note they said the billboard hosts, and media print titles, were aligned with their objectives and message. They said they had taken steps to ensure that every poster site had been planned in accordance with guidelines on proximity to schools and religious buildings as advised by Outsmart. It was relevant that it was used in August, when the schools were closed for the summer holiday.

Newcastle City Council considered the content to be acceptable. City Outdoor took from that, that other local councils would have a similar view. They said there were relatively few people passing by because of the Coronavirus situation.

In relation to the press version, BrewDog had support from the publications in which the ad had appeared.  The Economist, The Week and Metro expected that the message would be understood by their readers, and each of them was happy to run the ad.

In all cases, the swear word was said to be implied, not explicitly stated, which BrewDog believed had precedent. They did not believe the message would have caused serious or widespread harm or offence.

Metro said they had believed the ad was suitable for their readers because 98% of them were over 18 years of age.

The Week said they considered the ad with the obscured text to be in line with their editorial policy and was unlikely to be inappropriate for their readers, whom they considered to be intelligent and curious. They said the average age of their readers was 52 years and that 96% of them received the magazine via subscription.

The Economist said they had considered the ad with their editorial team before publishing it. They said there was no ban on swearwords in The Economist, but they did not use them often. They acknowledged that some readers might find the ad distasteful, but did not consider it would be offensive or harmful to either adults or children. They had received one complaint made directly to them on grounds of taste.

The ASA said they "acknowledged that the poster showed an obscured version of the word “Fuck”".

The ASA has a habit of using that word in these rulings, multiple times, even when it didn't appear in the ad itself.  In fact, they used it no fewer than SEVEN times in this ruling.  Woof!

In relation to its appearance as an out of home ad, the ASA also accepted that it had been placed in accordance with guidelines on proximity to schools and religious buildings; that the ad had run during school summer holidays and that one local authority (Newcastle City Council) had been asked and considered the ad acceptable for use.

The ASA got the pun, but said it considered it would be clear to most of those who saw it that the ad referred to the word “F*ck” in the context of the expression “F*ck you”. They considered the word “F*ck” was so likely to offend a general audience that such a reference should not appear in media where it was viewable by such an audience. They concluded that the out of home placement of the ad meant it was likely to cause serious and widespread offence and was not appropriate for display in untargeted media.

In relation to Metro, the ASA acknowledged that most readers of Metro were adult. They considered that "many would accept that the ad was using a play on words to make a statement about environmental issues as part of its marketing message. Nevertheless, as a widely available, free newspaper, the ad was untargeted." The ASA went on to say that "Although the ad intended to use a pun to get its message across, we considered it would be clear to most readers that it referred to the word “F*ck”, a word that was likely to be considered unacceptable by many readers in untargeted media. We also considered the expression the ad referred to “F*ck you” ? was likely to be associated with an aggressive tone." I have included these asterisks to spare your blushes, even though the ASA didn't.

So, when it comes to Metro readers, the ASA ruled that the ad was likely to cause serious and widespread offence and was not appropriate for use in that publication.

In relation to The Week and The Economist, they decided not to uphold. The rationale and distinction are as follows:

"We considered that an obscured version of the word “F*ck” reflected similar use of language elsewhere in The Week and The Economist and, in light of the ad’s intended message, was not out of place. We also acknowledged these publications were not free and had to be actively purchased in a shop or by subscription. While some readers might have found it distasteful, we considered it was unlikely to cause serious or widespread offence in those publications."

The ad must not appear again unless suitably targeted.

BrewDog was reminded (again) to avoid causing serious or widespread offence by using swearing or implied swearing in untargeted advertising.

No doubt the ASA will keep BrewDog on a short leash if it continues to churn out ads which cause the ASA to swear... repeatedly...

BrewDog's co-founder and CEO James Watt's wasn't pulling his punches. “Today the Advertising Standards Authority banned our activism advert... The ASA can go f**k themselves. We are in the midst of an existential climate crisis.

“Thank you to the Metro, The Week, The Economist and billboard sites for understanding the importance of our Carbon Negative campaign.”

You can read about the last time they got into trouble, due to "SOBER AS A MOTHERFU...", here.

In that case, they managed to get the ASA to say "motherf*cker" three times.

Let's hope visitors to the ASA's (free) website are made of sterner stuff than the viewers of BrewDog's untargeted ad...!!

The four-letter stunt marks a PR boast that its beer can be drunk guilt-free following a £30m climate action programme that has seen Brewdog purchase 2,050 acres of land near Loch Lomond where it has committed to plant 1 million trees and restore 650 acres of peatland. By doing so Brewdog will create a carbon offset sufficient to cover the CO2 costs associated with the day to day running of its business. 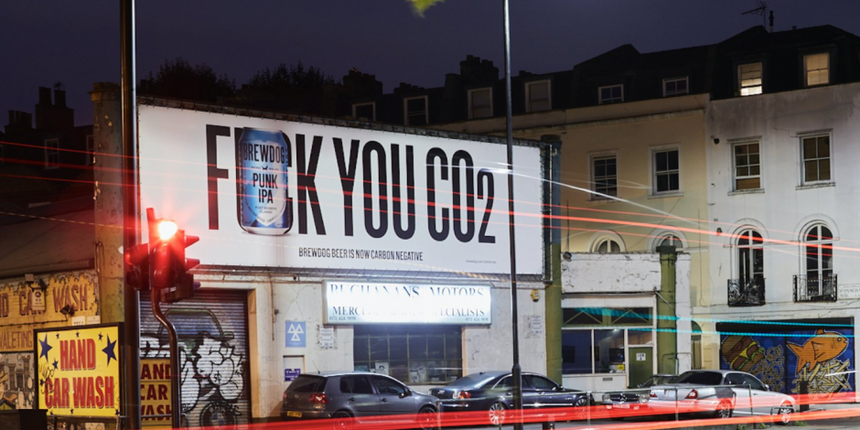