For some months now, concern has been growing about a form of credit known as 'Buy Now, Pay Later' (or BNPL for short). At first sight, this may seem a relatively harmless and low cost form of credit. But now the best known BNPL brand, Klarna, has been called to account for its advertising, not by the plodding statutory regulator, the Financial Conduct Authority (FCA), but by the more nimble advertising self-regulatory body, the Advertising Standards Authority (ASA). And this train of events has been kicked off by the estimable campaigning MP, Stella Creasy, who is sometimes credited as the person who killed off Pay-Day Loans. Creasy submitted complaints about 3 influencer advertisements, and the ASA added a 4th of their own to the investigation. The adjudication was published yesterday as an early Christmas present for Klarna, and the complaints were upheld on in relation to all 4 ads.

In their response to the ASA complaint, Klarna explained that they offer three payment methods to consumers in the UK. The first is particularly popular with Gen-Z shoppers, who seem to like to buy products online, particularly clothes, and then return them if they don't like them or they don't fit. It is often integrated into the checkout process in online shops. This option allows consumers to pay within 30 days after delivery with no interest or fees, so they can return items before making payment. The second option is to re-pay the loan in three equal, scheduled monthly instalments, with no interest or fees. The third option is traditional financing, and is the only one of the three that is a regulated credit product.

Just as pay-day loans were justified as a better alternative to traditional loan sharks, BNPL can be used by people who may be unable to access other forms of credit. Used properly, it can allow consumers, including the 'credit-poor', to make a specific purchase via a short-term and interest-free loan.

So what's the problem?

This all almost sounds too good to be true. But there's a reason for that. It is.

There are several concerns about BNPL in general, and Klarna in particular. The first concerns the way that BNPL is marketed. And Klarna's marketing strategy has been singled out for criticism, including the use of influencers and celebrities like Snoop Dogg. These campaigns are said to trivialise a financial decision, and critics draw parallels with the puppets used by the defunct pay-day loan company, Wonga.

In a written parliamentary question on 20th July, Stella Creasy identified three points on which she wanted Chancellor of the Exchequer to consider asking the FCA to issue guidance about BNPL.  The first is the potential effect on a consumer's credit score if they fail to repay a loan in accordance with its terms, which can be both substantial and negative. The second is the potential sale of debts to collection agencies who will then take legal action against the consumer. Finally, there are the other risks of using BNPL that consumers should consider, such as spending beyond their means.

Eventually, on 1st September, Stella got a rather mealy mouthed answer from John Glen MP on behalf of the government. He referred back to the new rules for BNPL introduced by the FCA in November 2019 following its high-cost credit review.  He said "The rules prevent firms from charging backdated interest on the amount repaid by the customer during the offer period, requires that promotions contain balanced and appropriate information, and means that firms must give customers prompts to remind them when offers are due to end." He also said that the FCA would continue to monitor BNPL and issue further guidance if necessary.

However, most interest-free credit arrangements of up to 12 months are not currently regulated by the FCA regulation. This meant that Stella used the wise expedient of turning to the another regulator, the ASA, to mount her attack on BNPL.

Why did Stella Creasy complain about the Klarna ads?

The 4 influencer ads under investigation were very similar. The influencers described how they had used Klarna to finance their 'retail therapy' as way to overcome the misery of the Covid-19 lockdown.  Stella questioned whether the ads were irresponsible for encouraging the use of Klarna to help people lift their low mood during lockdown. The ASA Executive considered this by reference to Rule 1.3 of the CAP Code, which states that ads must be prepared with a sense of responsibility to consumers and to society.  The ASA Council upheld the complaints, ordering that future advertising must not irresponsibly encourage the use of Klarna’s BNPL service, particularly by linking it with lifting or boosting mood.

What does the decision mean for BNPL advertising?

Instead of focussing on the specific omissions from the ads in the investigation, such as the issues of credit scores and debt collectors, the ASA addressed these issues in new guidance for BNPL advertising published three weeks earlier on 1st December 2020 and which will come into force on 2nd March 2021.

The guidance distinguishes between general advertising for BNPL on TV, radio, print and social media as opposed to offers of BNPL at the checkout of an online shop. The overarching principle is that consumers should have sufficient information to make an informed decision about whether to use BNPL before committing to it. This means understanding that BNPL is a form of credit; that it may not be suitable for everyone; how balances must be settled; the penalties or fees they may be payable; and any other significant conditions.

What lessons can be drawn for advertising generally?

The ASA chose to investigate these ads exclusively on the basis of the very amorphous rule about social responsibility, rather than about their failure to provide more detailed information. While the social responsibility rule gives the ASA very wide discretion, it creates considerable uncertainty for advertisers in all sectors that are heavily regulated, as well as those offering innovative products and services that are currently not subject to specific regulation, but operate in spaces adjacent to those categories.

Stella has shown how the ASA can be engaged to achieve consumer protection objectives far more quickly that statutory regulators like the FCA. However, there may be trouble ahead. If BNPL operators fail to comply with the ASA's guidance, the only sanction that they'll face is negative PR. The ASA cannot apply fines, and as BNPL operators don't need a licence, they cannot be threatened with losing it. Ultimately, if the BNPL is to be effectively regulated, a licensing regime will be essential. In the meantime, however, the latest ASA decisions and guidance provide a sticking plaster.

If she carries on like this, Stella Creasy is in danger of giving politicians a good name. Perhaps for her next trick she could solve the conundrum of a regulatory regime for political advertising, a hot potato which is too hot for even the ASA to handle.

We told Klarna Bank AB, and influencers Bradley Harper, Claire Menary, Aisha Master and Yasmin Fatollahy, that their future advertising must not irresponsibly encourage the use of Klarna’s deferred payment service, particularly by linking it with lifting or boosting mood. 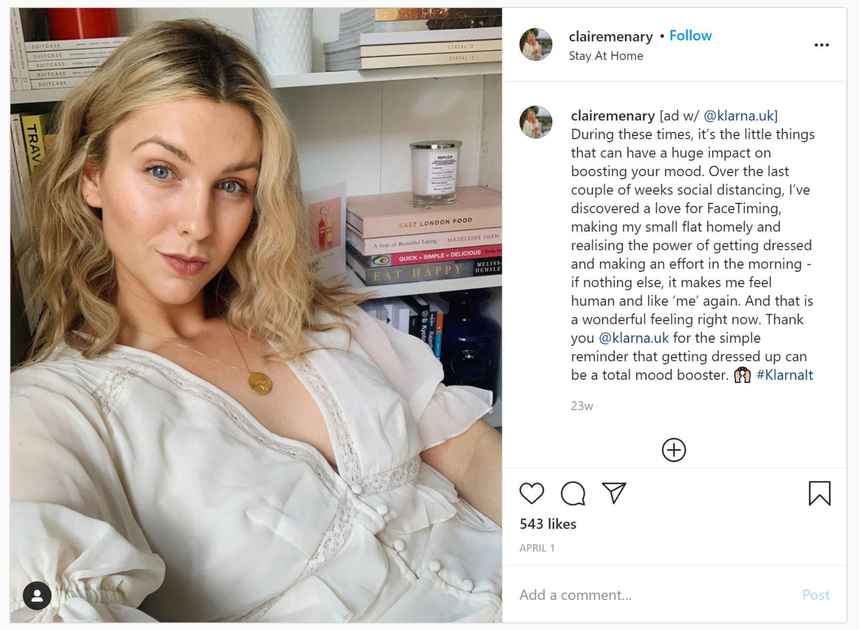