Yesterday was my first day back in the office after the Christmas break. Well, in fact, it was the first day back in my living room after my Christmas staycation. It's always the most miserable - I mean joyful - day of the year. But then something unusual happened. The phone rang and a gentleman who I have never spoken to before, but who had read my article about racism in advertising, started to tell me about an ad he'd seen in Monday's Times newspaper. He also emailed me a copy, which is illustrating this post.

The gentleman is black and told me that he found the ad to be discriminatory and offensive. He confirmed that he had already lodged a complaint with the Advertising Standards Authority, but having seen my article, he wanted to bring it to my attention, and I'm grateful to him.

In case it's not clear, the headline states "Let's keep making space to help stop the spread." The body copy then says "Around 1 in 3 people with Covid-19 don't have any symptoms, but can still pass it on."

The imagery shows two mums standing at the school gates. The woman facing the camera is black and has some kind of green cloud emanating from her mouth and nostrils, which is presumably intended to represent the coronavirus.

The gentleman caller was clearly seriously upset by this imagery. His reaction should be the determining factor. It is hardly for me to tell him what he should or should not find offensive.  He said in his email that the image of the black lady spreading Covid-19 is discriminatory.

My first thought was that 20% of NHS staff are from the BAME community, so if you want to portray BAME people in a Covid-19 related ad, it might be more accurate to show them fighting the disease, not spreading it! To be fair, I have seen other ads that show front line NHS workers from the BAME community in that positive way, so this one execution should be seen in that context. The danger is, however, that people may not necessarily see it in that context, so it has to stand up to scrutiny on its own.

Before writing this post, I also sought the views of a couple of my partners who are members of the BAME community.  While they assumed there was no intention to offend, they certainly thought that the ad was ill-judged.  My colleagues also pointed out that the BAME community has been particularly hard hit by Covid-19, not just medically, but also economically and socially. We know, for example, that people from ethnic minorities have been physically attacked by thugs who have accused them of 'spreading the disease'. Furthermore, they tell me that there has been a particular challenge in getting the "space" message through to members of the BAME community, who are often more tactile than the British are traditionally.

I doubt there was any racist intent behind the ad, but there is no denying that there must have been a creative decision to show the black woman spreading the disease, not the white woman. Who made that decision? Why?

It is also ironic that the ad was published in the papers on Monday morning, following the government's directive that primary schools must re-open, only for the government to decide to shut them again on Tuesday.

Nevertheless, the lesson is surely that while it is great to see more people of colour represented in mainstream advertising, these ads needs to be created in a way that is careful and thoughtful in order to avoid causing unintended offence. And those of who are not members of the BAME community need to be extremely careful about making judgements about what may or may not be deemed offensive by members of that community.

"The advertisement is discriminatory - showing a black person spreading Covid. The Government should be sensitive to these things, we are now in 2021. This nonsense must stop." The complainant. 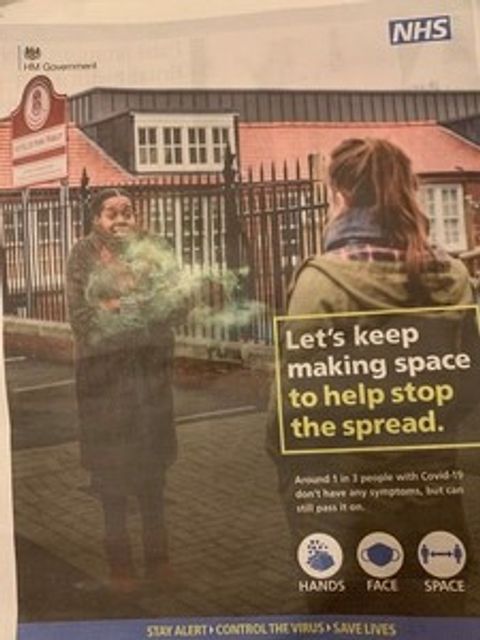 "Everything you always wanted to know about Brexit*. *But were afraid to ask."
Brinsley Dresden