German clothing company KaiAviation has taught us a history lesson that Boris Johnson could learn from. He purports to be an historian, after all, although having read his biography of Winston Churchill, I would beg to differ. But the lesson is this: if a foreign advertiser decides to ignore British advertising rules, there's not a whole lot that we can do about it.

Some readers may be offended by the images of KaiAviation's advertising, for which I apologise, but without the images, its hard to understand the story. In terms of the degree of nudity and the age of the models, these ads are less contentious than those by American Apparel, which admittedly is setting the bar pretty low. The bigger problem is the harmful gender stereotyping. KaiAviation's entire shtick appears to be to apply aeronautical phrases, such as 'remove before flight' and 'follow me' to cheap items of clothing, such as singlets and briefs. These are then advertised by models standing in front of planes, including, bizarrely, a World War Two vintage Messerschmidt Me-109. One can only hope that this is not a particularly profitable business model.

The Advertising Standards Authority's investigation was triggered by a single complaint about ads published in the February and March editions of Pilot magazine, published in the UK by a British publisher, Archant.  Apparently the complainant had to wait until the ad had been published twice before being sufficiently offended to register a complaint.

The ASA wrote to KaiAviation by email and post and even obtained proof of delivery, but did not receive the courtesy of a reply. Perhaps they should have tried Air Mail?

The ASA also asked the publisher, Archant, to undertake that they would forward their correspondence to KaiAviation. I have to tell you now that no such undertaking has been received, and that consequently, this complaint has been upheld.

But let's not be be beastly to KaiAviation. The ASA did not think that the image of the woman in the vest standing next to the aeroplane (not the Messerschmidt) was in a sexualised pose.  In more good news for the Persons Unknown, trading as KaiAviation, the ASA also concluded that another picture of a singlet, briefs and thongs were relevant to the clothes being advertised and unlikely to cause serious or widespread offence, or harm.

At this point, they thought it was all over. But then it went to penalties, as the ASA turned its attention to two other pictures in the ad. These were images of the models’ buttocks wearing briefs with the slogans “Follow me” and “Remove before flight”.  These images focused on the women’s "body parts", while "obscuring their faces". The images were also combined with the "suggestive" slogans, creating a context that  stereotyped women by presenting them as sexual objects. Consequently, the ASA decided that the ad was likely to cause serious offence, as well as being a harmful gender stereotype, which meant it was irresponsible and therefore in breach the CAP Code of Advertising Practice.

There has been considerable debate about the new rule against harmful gender stereotypes, which encapsulates a nebulous concept. Presumably that is the reason why the ASA decided to conduct a formal investigation, despite the fact that the ad appeared in a publication with a relatively small circulation, which is likely to be made up almost entirely of adults. Otherwise, it is hard to see how the investigation is consistent with the ASA's own 'prioritisation principles'. It seems highly likely that far more people will have seen this ad as a consequence of the ASA's decision than ever would have done as a result of its publication in Pilot.

The more significant point is that while the government is working on its plans to ban HFSS advertising online, this investigation demonstrates that advertisers based outside the UK are likely to ignore any such ban if it is not reflected in their local law and regulation. In this case, there is a third party media interface, namely the publisher, Archant, who may be persuaded not to publish the ad again. Indeed, they are probably obliged not to do so by virtue of their membership of a trade association. However, the images continue to be published on KaiAviation's own website, hosted in Germany, and any attempt by the ASA or any other British regulator to block access by British internet users simply won't fly.

So Mr Johnson's attempts to fight the invasion of foreign HFSS advertisers is less like Churchill fighting on the beaches, and more like an earlier British leader, King Canute, drowning as the tide came in.

The ad must not appear again in the form complained about. We told Person(s) unknown t/a KaiAviation to ensure that their ads were socially responsible and did not cause serious or widespread offence by objectifying women 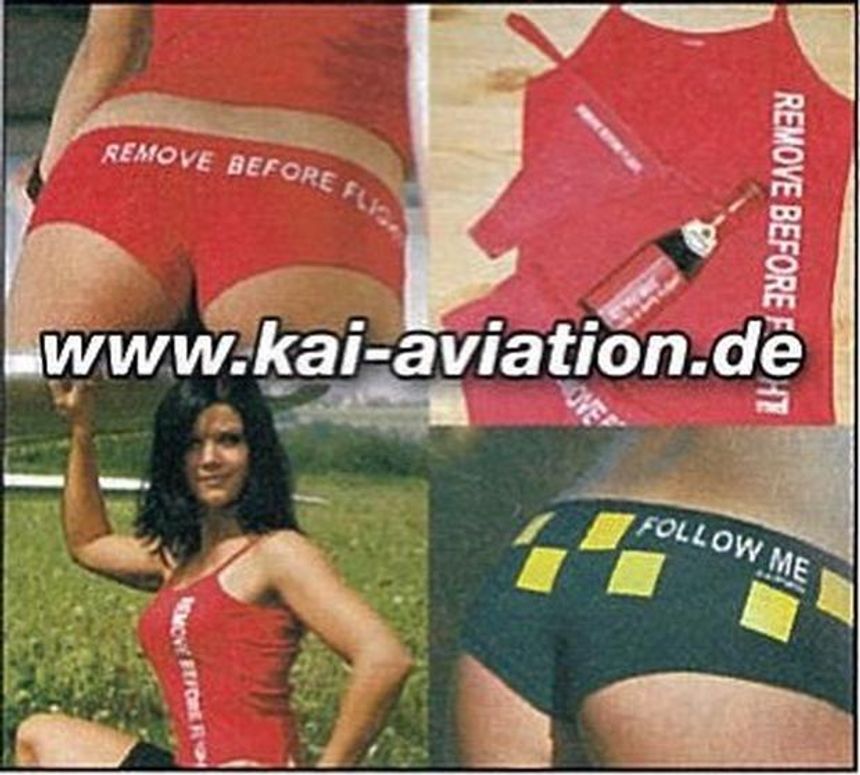 Very interesting ruling on gender stereotypes and harm from the ASA in this case involving some rather unsubtle advertising of women's underwear in a aviation magazine. To be applauded! https://t.co/7x2Y0wMxo0 pic.twitter.com/bevMpxdzBZ