This morning, the Advertising Standards Authority published its decision not to uphold complaints about a newspaper ad for the Land Rover Defender that appeared in the The Guardian on 12th June 2021. The ad shows the Defender being driven on an untarmacked road through a forest with the headline "Life is so much better without restrictions". The reference to "restrictions" is then contextualised by the sub-heading, "Book your extended test drive" and the body copy, "Understandably, there are still restrictions as life slowly gets back to normal. Not so with the Defender, the 4WD vehicle with a capacity to go almost anywhere and do almost anything. If you take one for an extended test drive … a whole new world of freedom awaits."

Your first question might be "Why did Land Rover buy space in The Guardian of all places?"  Given its left-of-centre editorial line, how many Guardian readers are in the market for a 4x4 SUV? History does not record how many sales were made as a result of this particular insertion, but it does record the fact that 96 people complained to the ASA as a result of this ad being placed in this particular newspaper, despite the fact it must have appeared in other newspapers whose readers did not complain. Perhaps readers of The Daily Telegraph are not environmental activists? Who knows?

The complaints also included ones from Adfree Cities, Badvertising and New Weather Institute - which is part of a trend of campaigning groups targeting both advertisers and agencies, and using the ASA as a platform for their activism.

The complaints raised two issues. The first was that the headline, "Life is so much better without restrictions", was misleading because it implied that the Defender was above those restrictions, "including those aimed at preventing climate change or other wide scale ecological damage".

Jaguar Land Rover (JLR) argued that the "average consumer" (who is reasonably well informed, observant and circumspect) would understand the line to be about the challenges of the COVID-19 pandemic and the easing of lockdown restrictions. The Guardian gave a similar response, saying the line was a tongue in cheek reference to the recent easing of lockdown restrictions.

In other words, consumers would understand the line as intended by JLR, rather than in accordance with the strained interpretation proffered by the activists in pursuit of their own agenda. And while their agenda may be perfectly reasonable and laudable, that doesn't make their interpretation of the claim any less contrived.

The complainants' second issue was that the ad was "socially irresponsible because it implied that the vehicle depicted could be driven in forests or similar ecologically-sensitive environments which could encourage or condone behaviour that was detrimental to the environment."

JLR said that they do not use ecologically sensitive areas when making their ads, and there was no implication that their cars should be driven in such places. Furthermore, the road is an "established track", with no "fresh...disturbance involved." The Guardian agreed. The car is driving along a clearly defined track, rather through a built-up forest and not over greenery or wildlife. It is not being driving erratically or in a manner which might be detrimental to the forest or wildlife.

The Council of the ASA agreed with the defence offered by JLR and The Guardian, and decided not to uphold either element of the complaint. On the first point, Council simply agreed that consumers would interpret the headline in the way suggested by the advertiser and the publisher, not the complainants.

On the second point, the ASA acknowledged that the Defender was designed to be capable of off-road driving by farmers, for example, and that in some forests and National Parks it is illegal to drive on footpaths, bridleways, restricted bye-ways or entirely off-track, so care is needed when showing cars in forests. However, untarmacked roads are often found in rural areas and mud splatters were not necessarily indicative of irresponsible use, so this issue was also decided as 'not upheld.'

Given The Guardian's own involvement in this investigation, it is slightly odd that their headline for today's report is that the ASA has ‘overturned’ a ban on the JLR ad, which is highly misleading, to the point of being 'fake news'. In fact, it appears that the ASA Executive must have produced a Draft Recommendation suggesting to Council that the complaints about one or both issues should be upheld. This Draft Recommendation would also have been shared, in confidence, with campaigning groups that complained, as well as JLR and The Guardian. Council simply decided to take a different view and came to its own conclusion, as it is required to do.

Today's Guardian quotes Robbie Gillett from Adfree Cities as saying, “The ASA council has made an overly narrow assessment of this Land Rover advert and failed to see it in a wider picture of a worsening climate crisis, rising urban ownership of SUV's and lethal increases in air pollution."

That is a perfectly legitimate point of view, but it wrong for The Guardian to say that the ASA has overturned a ban. There has only been one decision about this ad, which was that it did not breach the CAP Code. There has also effectively been a breach of the confidentiality of the investigatory process, as we now know that Council did not follow the Draft Recommendation.

It is also clear, however, that the direction of travel is towards more challenges by environmental activists about advertising for SUV’s and 4x4’s, particularly when they being driven away from urban environments and tarmacked roads. In France, the advertising regulators already prohibit ads from showing cars from being driven or even parked off-road, so it will be interesting to see if the UK adopts a similar rule in future.

Finally, The Guardian also says that activists accuse the ASA of bias, although that is not apparent from Robbie Gillett's quote. However, if I had one pound for every time someone has accused the ASA of bias when they are disappointed by the outcome of an ASA decision, I'd be a wealthy man. (No, don't say it!)

"Watchdog overturns ban on advert of Land Rover in forest." The Guardian (Note: This headline in inaccurate). 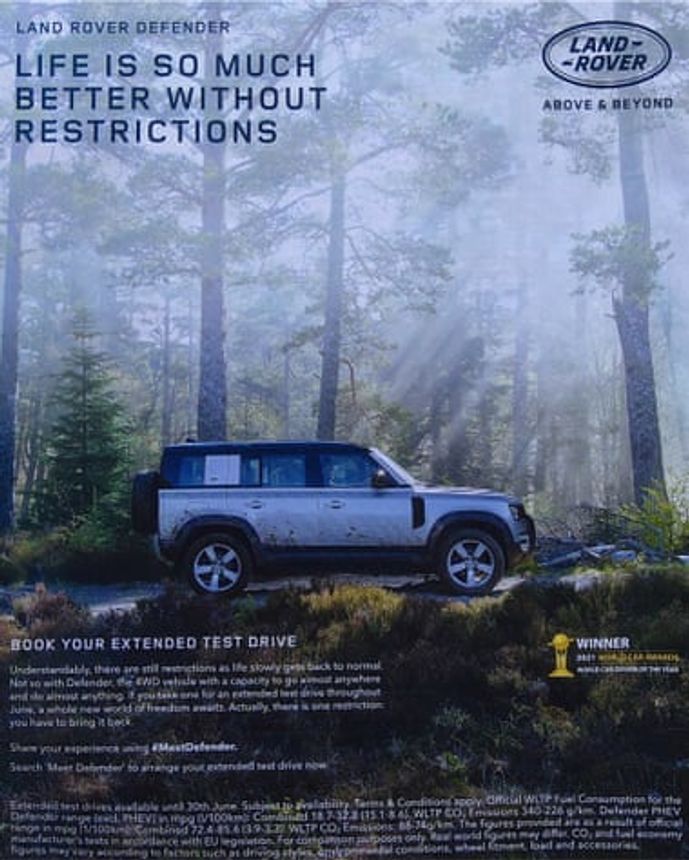