Is it safe to come out yet?

Armando Iannucci stopped making The Thick of It many years ago, and it's easy to see why. Even he could never have imagined that politics in the UK would reach these levels of ludicrousness.

I had to watch it through one squinting eye and the gaps in my fingers, but I could swear I just saw The Rt Hon Nadine Dorries MP, Secretary of State for Digital, Culture, Media and for some reason Sport, voluntarily appearing in a TikTok, in which she raps (God help us) about the forthcoming Online Safety Bill.

Maybe Ms Dorries has just decided to take one for the team here, to distract from our scandal-laden Prime Minister? If so, the meagre 209 'likes' at the time of writing might indicate that she hasn't quite hit the mark just yet. The multi-billion pound cost of living measures, which were announced the day after the Sue Grey report, probably did a more convincing job of distracting the public, but this was a valiant and selfless effort by the Secretary of State for DCMS.

Admittedly, as a 40-year-old, I'm probably not her target audience (hence the Phoebe from Friends meme), but I'm struggling to work out who is the target audience for this content.

I won't go into too much detail about the TikTok itself, because quite frankly I can't bear to keep re-watching it. I have included a link to it below, but before you watch it here are my top five moments to look out for:

1. "We're passing some new legislation, to make the internet safer for the younger generation..."

This is accompanied by clip from the brilliant comedy show, 30 Rock, showing a 60 year old Steve Buscemi trying to pass as a teenager in an American high school. The irony hurts so, so bad. 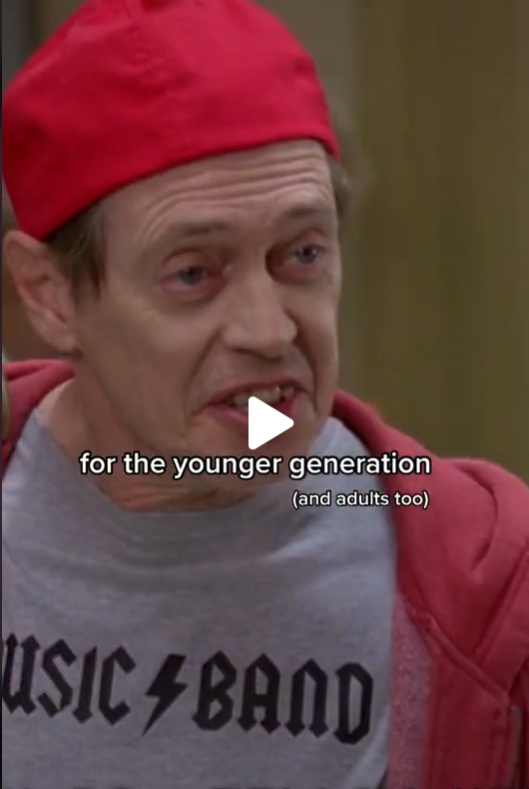 The inclusion of that meme is genius if it's a commentary on older people masquerading as children online and putting them in danger, but it's just as likely that whoever edited the video is having a good laugh at Boomers trying to shoehorn themselves into Gen Z culture by making toe-curling TikTok videos...

2. "It will force 'Big Tech' to stop their terms being breached, and puts in measures to defend free speech".

At this point, an article from The Times flashes up with a headline that says "Online Safety Bill poses no threat to free speech". Great proof for Ms Dorries' claims about protecting free speech you might think, until you look a little closer to see that the author of said article is Chris Philp MP, Minister for Tech and the Digital Economy. Mr Philp's remit includes... drumroll.... the Online Safety Bill. 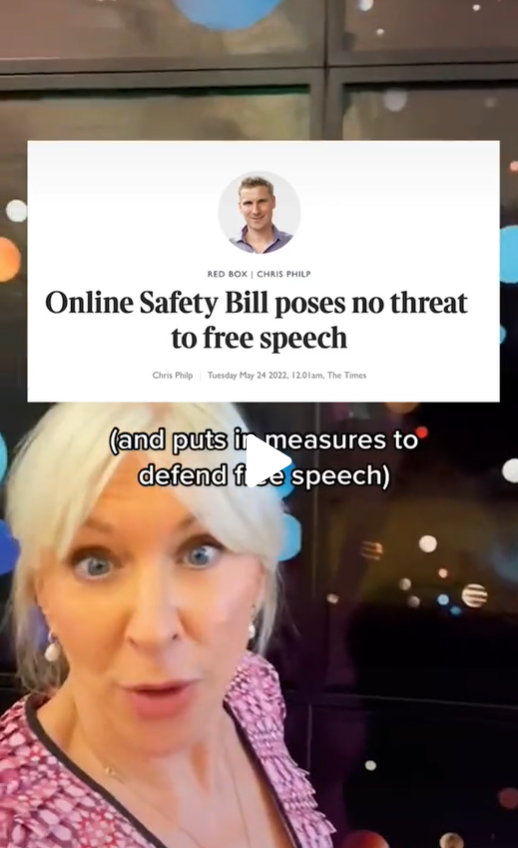 3. Doubling down on this claim, the Secretary of State goes on to say/sing/rap: "Is it true it will impact, freedom of expression?  ...NO!" 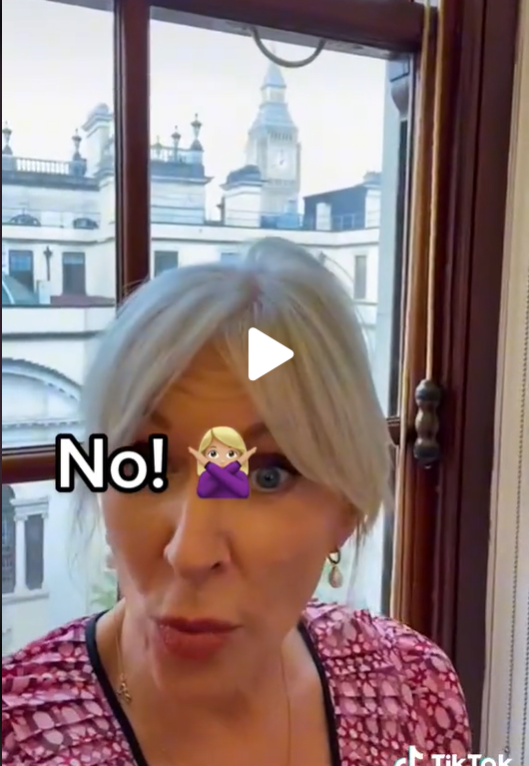 Wow. That's quite a 'courageous' claim, because it WILL inevitably impact freedom of expression. To say it will have no impact on freedom of expression seems a tad misleading, or, dare I say it, a little bit like "fake news". Oh, the irony heaped on more irony. Make it stop. Perhaps a clip of a cow pat might have been spliced in at this point.

Let's remind ourselves at this point that this is the UK cabinet minister in charge of the UK's culture, media, and all things 'digital'.

The Secretary of State goes on to explain, "We've put in legal protections... in the 19th section." A few excerpts from the draft Bill pop up on screen at this point - who said legislation can't be 'cool'? 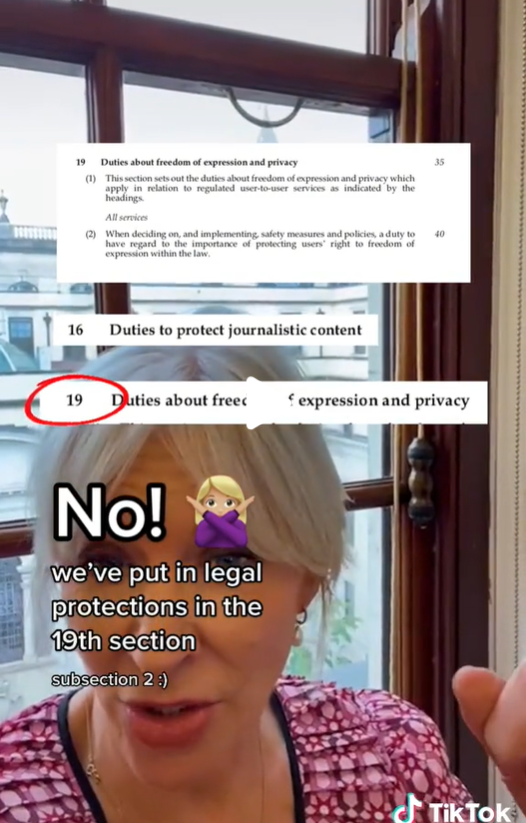 4. The mic drop. Standard. I do like the background artwork though - kind of modern but biblical at the same time. 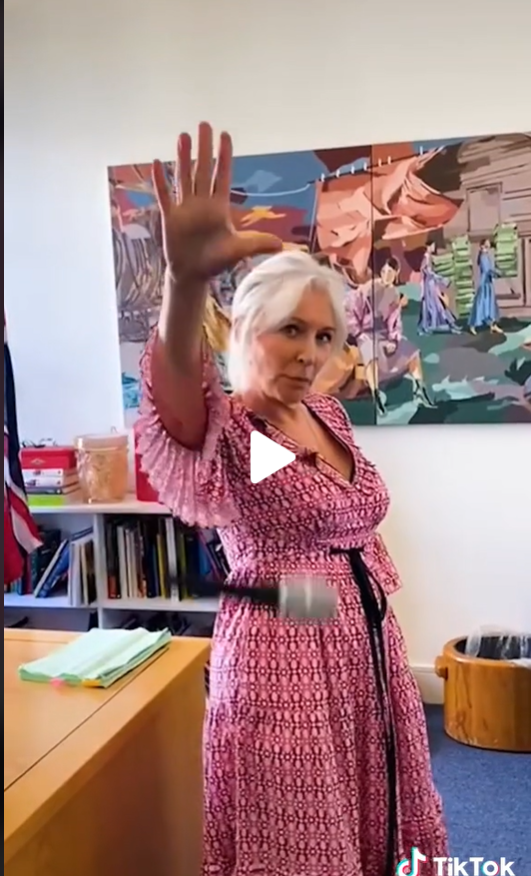 I'm less convinced that showing a bin made from a tree trunk lined with plastic and stuffed with more plastic is ideal. The Environment Secretary might release his own rap diss battle video about that in due course. At least there weren't any wine glasses strewn about the place.

The text accompanying the video was as follows:

I wonder if government ministers' social media posts should also have some other kind of disclosure For example, #Ad, or #Ad-enough-of-politicians-rapping-yet?

Credit where it's due

It's easy to criticise though, isn't it?

Where can you watch it?

If you must, you can watch it here.

But if you value your own online safety, make sure you're sitting sit down and not sipping a cup of tea while you watch this.

Also, if you have a shred of credibility left with your children, make sure you protect that credibility (and protect your children's eyes and ears) by making sure they're not in the room when you watch this.

I, for one, hope that our ministers take their day jobs a little more seriously, and leave the content creation on TikTok to... literally anybody else.

And if the Secretary of State is reading this... I know you won't mind this cheeky article because I know you have a sense of humour, Minister.

At least I hope so, otherwise, I really can't explain this video.