The ASA has today upheld a complaint against LARQ, a water bottle retailer. The original ad appeared as a Facebook post in September 2020 and featured an image of a water bottle with text: "The LARQ Bottle eliminates harmful bacteria and viruses, keeping your water and bottle clean 24/7. Shop Now".

The claimant challenged whether the claim that the bottle could eliminate "harmful bacteria and viruses". The mention of 'viruses' was particularly important to consumers, given that covid-19 is a virus, rather than bacteria (although, covid-19 is typically transmissible as an airborne, rather than waterborne, virus).

Whilst LARQ did remove the ad when they were informed of the complaint, the ASA continued its assessment. The ASA, in their assessment, considered that consumers were likely to interpret the claim “the LARQ Bottle eliminates harmful bacteria and viruses” to mean that the product was able to successfully kill bacteria and viruses in the water. The LARQ bottle relies on a UV-C LED cap to 'treat' the water and kill any harmful pathogens that may be lurking (or, larqing...) in the water. LARQ submitted certificates of analysis for testing, which dated back to 30 May 2018, showing that:

Whilst these results are impressive, no testing or substantiation was provided against other types of bacteria or viruses. The bottle is advertised as suitable for adventurers, so the risk of catching norovirus, for example, from a contaminated water source, is not eliminated through use of the bottle. As such, the ASA concluded that the claim had not been substantiated and was misleading - the ad must not appear in the form complained about.

Interestingly, whilst researching for this blog post, I came across a number of blog posts and articles from people reviewing the bottle and repeating its claims as being capable of killing viruses. So whilst the ASA has effectively stopped the spread of this claim at its source, this does not mean that consumers - through their own research - will not be led to believe that the bottle, which costs nearly £100, is capable of killing viruses.

This is a manifesting of misleading advertising in the modern age of social media. Once a claim is made online, it will continue spread virally (sorry), even once the original source of the claim has been removed.

(Footnote: The image below is of a similar LARQ Facebook ad, not the one that was the subject of the investigation, which is no longer available online).

LARQ had not provided sufficient evidence to substantiate the claim that the bottle “eliminates harmful bacteria and viruses”, as consumers were likely to understand it, we concluded that the claim had not been substantiated and was misleading. 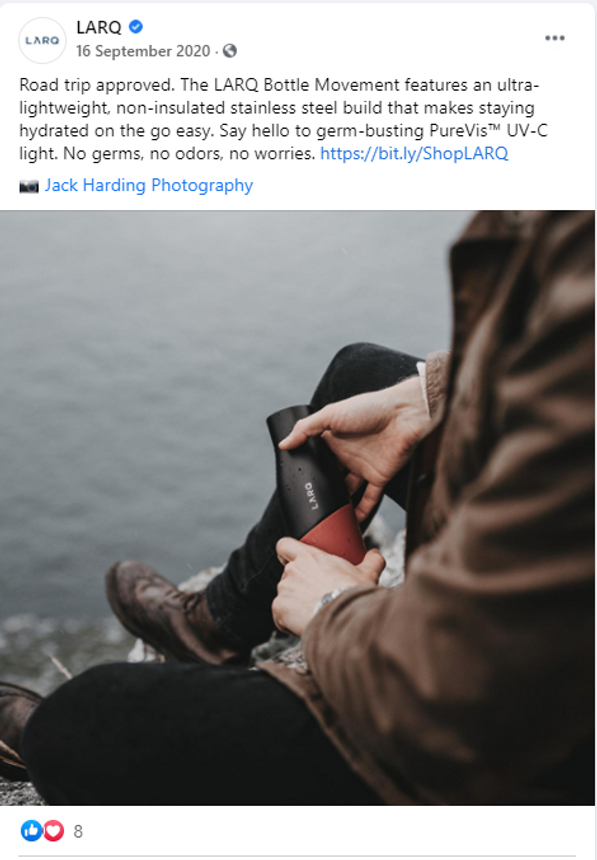