Over the weekend, whilst scrolling through the litany of adverts that my Instagram feed now appears to be, a post caught my eye. Ah, but this was not any old ad, this was an ad from the Advertising Standards Authority (ASA). I noticed that the post was labelled as a 'Sponsored' post in my feed, I don't follow either the ASA or Belle Hassan, and highlighted sanctions issued by the ASA against the influencer Belle Hassan. A screen grab of the post is shown below.

Today, the ASA has announced that six influencers are going to be subject to further sanctions for consistently failing to disclose ads on their Instagram accounts. This escalation comes in the wake of action taken by the ASA in June 2021, when they launched a dedicated webpage that named and shamed those influencers who repeatedly failed to disclose social media posts as ads. This was discussed previously on this blog by my colleague Geraint Lloyd-Taylor.  The ASA undertook proactive monitoring of posts by influencers and determined that the rules on disclosure were adhered to in only 35% of cases. Consequently, the named individuals will be subject to enhanced monitoring going forwards. The ASA has now gone one step further and taken out their own ads (Inception, much?) against those individuals alerting consumers of their failure to follow rules. It would be interesting to know whether the ASA has actively targeted these ads at particular groups of individuals. Was I served the ad as being someone particularly vulnerable to influencers shilling Botox?

The ASA has made it clear that the ads are the first of a possible escalation of sanctions against rule-breaking influencers and they may impose further sanctions if needed. Given the ASA's limited available sanctions (by contrast with the statutory regulator, the Competition and Markets Authority), it's interesting that the ASA has stated that these further sanctions may include "working with social media platforms to have the content of non-compliant influencers removed, or refer influencers to statutory bodies such as Trading Standards for consideration of statutory action including possible fines."

As a reminder, the ASA has made it very clear in its guidance for influencers that the clearest way to indicated that an ad is an ad, is by using #ad in a clear and prominent position on the post.

Our rules are clear: it must be obvious to consumers before they read, ‘like’ or otherwise interact with a social media post if what they are engaging with is advertising. 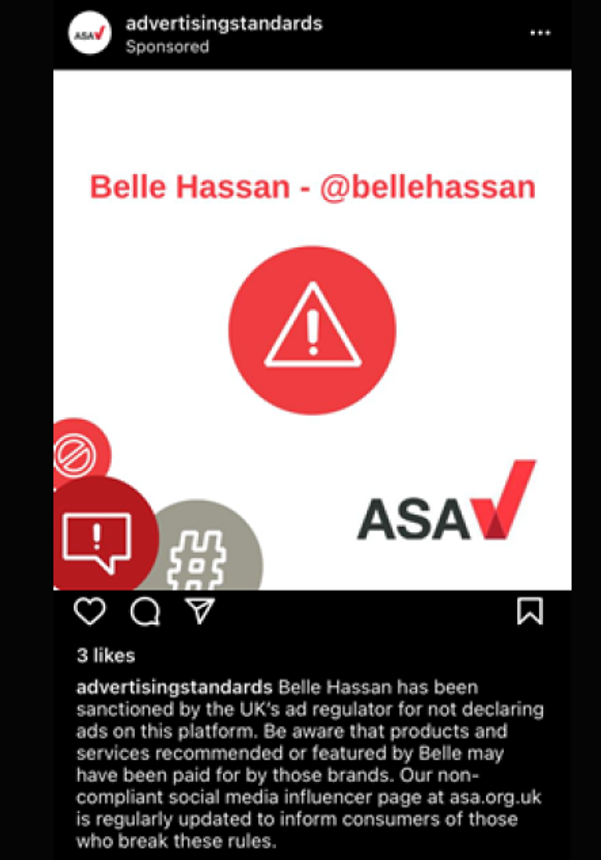